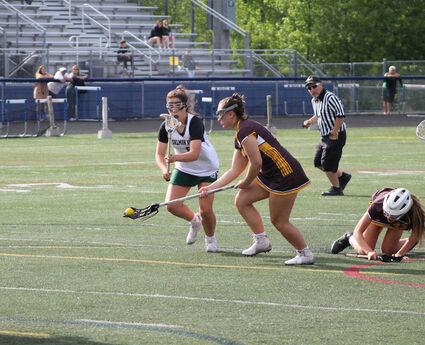 Tallis Tarbell moves to snatch the ball from a Canton defender.

The Salmon River Shamrocks easily clinched a third consecutive Section 10 title over the Canton Golden Bears and are headed to state finals.

They advanced in the Class D bracket at Jamesville-Dewitt on Thursday, June 2.

On Wednesday, May 25, the Massena Raiders won the Section 10 Class A championship game at St. Lawrence University.

The final score was 2-1 over the Franklin Academy Huskies. This year will be the first NYSPHSAA softball playoffs since the spring of 2019. Massena advances to Malta on Thursday, June 2 to play the Section 2 Class A champs. 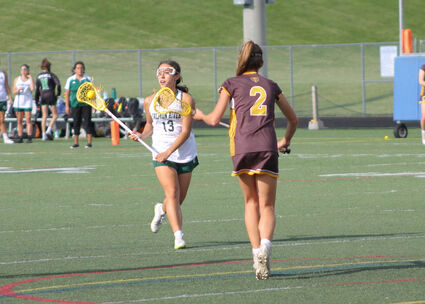 Joryan Adams resets an offensive play and looks for who is open.

The first three Raider batters reached base, with two caught in stealing attempts and a fourth struck out. Malone's Grace St. Mary in the bottom of the first was walked. She stole second and then moved to third base on a wild pitch. Three batters later, she crossed home plate on a second wild pitch.

After a scoreless second inning with three strikeouts from Wilson, Massena scored their two runs in the top of the third. Joslynn Bay led off with a single and then reached second on a ground ball out. Nylah Tillman then batted and reeled an RBI single. Maddie Tusa then reached base after batting a single. Up next, Wilson drew a walk. With the bases loaded, Tillman scored what would hold up as the game-winning run when a pitch hit Kristen Oliver.

Malone's hits came off of a bunt single from St. Mary and a single linedrive were Malone's two hits.