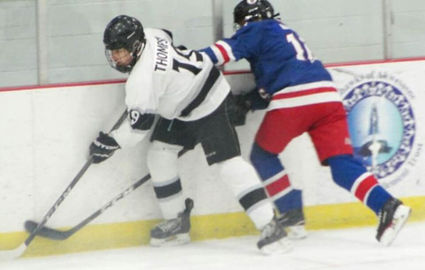 The Bantam B Wolves of the Upper Canada Hockey League had a heartbreaker on Kawehnoke.

Last Saturday they were tied 1-1 against the visiting South Grenville Rangers and with six seconds left on the clock, Hayden Walker picked up the loose puck in the neutral zone and took off toward Wolves goalie Xavier Delormier and scored for the 2-1 win.

South Grenville led throughout the contest on Barrett Robertson's first period goal. That goal held up until five minutes into the third period when the Rangers Kassey Jessome delivered a big hit on the Wolves Wyatt Benedict resulting in Benedict being helped off the ice and Jessome receiving four minutes.

In that power play Trysen Sunday had the biggest chance to score as he zig zagged through the crease but missed.

Also during that advantage Drey Thompson found the back of South Grenville's net as he took a blast that went through traffic in front of Rangers goalie Hunter Sanger.

After the tying goal, Sunday had another big chance to score Akwesasne's go ahead goal but he missed again. With time running out and the Wolves looking to settle for a tie, Walker of the Rangers scored his game-winning goal.

The Wolves Midget team in the Upper Canada Minor hockey league had a game scheduled immediately following this game against Leeds, but it was cancelled.