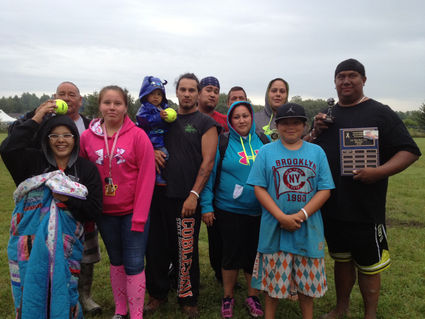 The family who started it all to honor one special woman - Tina. Her husband Alex, daughters Courtney and Sam, sons Travis and Dudes, grandchildren and one on the way.

With fourteen teams entered to play, Charlie White’s Memorial Softball Field was busy all day Saturday and all day Sunday. Through the beautiful weather on Saturday to the completely soaked and rainy Sunday, families came prepared with tents, water, sunscreen and cleats. With three years under their belt, Tina’s Pride Softball Tournament grew from 10 teams the first year to 14 this year.

Tina Thompson passed away on August 19, 2007 and afterwards Tina’s daughter Courtney was thinking of a way to honor her mother when she happened to be at friends college and saw a walk supporting cancer. Courtney was inspired by this and thought, “I want to do this for my Mom, and I can do this at home.” So for the past three years Courtney, her sister Sam, her brothers Travis and “Dudes” and her father Alex “Jughead” have been working hard to raise money to help others who have cancer and to donate to cancer research through the Syracuse chapter of “Cancer Walk”. First they had to come up with a name and Courtney and Sam immediately thought of how much their Mom loved them and how much pride she had for her children, her grandchildren and those who became family members by choice. Tina’s love and pride was evident on Sunday when Tina’s children were asked to gather their family for a photo; her daughters and sons were calling other’s to join in the photo, “Come in, you are part of this family too”. With four children, and nine grandchildren, with two on the way, Tina’s family is strong and growing.

This tournament is just one in a series of fundraisers to raise money for the Annual Cancer Walk to be held this October 20, 2013 in Syracuse, NY. The Cancer Walk organizers look forward to the members of Akwesasne’s Tina’s Pride, as 66 people joined and walked in support last year. Tina’s Pride donated over $7500.00 in 2012. 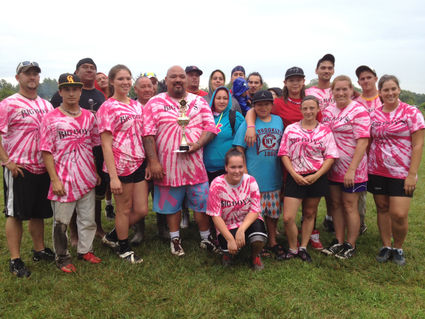 Fundraisers are held throughout the year and the money raised helps to cover hotel expenses for each walker in Tina’s Pride group; as well each walker receives a Tina’s Pride T-shirt. In return, members of Tina’s Pride are expected to donate their time working at fundraisers. Walkers can also gather pledge money for the Cancer Walk and donate on behalf of Tina’s Pride. Future events planned are a Luncheon on October 4, 2013 at 233 St. Regis Road starting at 11am. Tina’s Pride is also holding a Duck Race to be held on August 17th, 2013 in Snye Channel. If your fast and lucky duck comes in first you will receive $1000.00, second place $500.00 and the third place winner will receive $250.00.

During this year’s softball tournament, an impromptu collection was made; if spectators and players would donate $250.00 then Alex “Jughead” would shave his head bald. Well more than that was collected in a very short amount of time for a very good cause. Over $500.00 dollars was collected along with another $250.00 for Pete Timmons to shave his head and mustache. Congratulations to all teams and to all families supporting this event. Tina’s Pride is looking forward to seeing you next year. If you would like to join the cause to support Tina’s Pride and the Cancer Walk, everyone is welcome to join. Look for announcements in Indian Time and on CKON for times and meeting places.