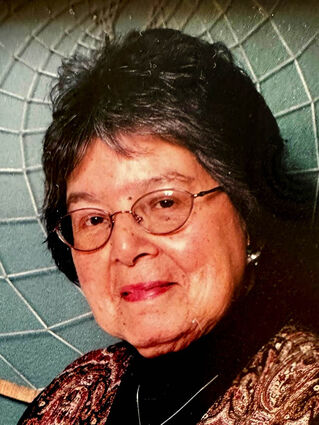 AKWESASNE – Mrs. Marion "Marita" Francis, 87, of 4 Francis Lane, peacefully reunited with her husband and her daughter in the early morning hours of Sunday, December 30, 2022 at the Tsiionkwanonsote Long-Term Care home.

Marita was born July 14, 1935 in St. Regis, Quebec, the daughter of the late Joseph and Josephine Casey Sawatis. She worked for a brief time in Rochester, NY before starting her family. Marita married the love of her life, Richard "Dickie" Francis on April 7, 1956 at St. Regis Catholic Church. He predeceased her on September 11, 2019 after 63 years of marriage.

Marita was a loving wife, mother, and grandmother who dedicated her life to raising her family. She also enjoyed traveling, mostly to visit family who lived away but she was also a devoted member of the Kateri Circle and attended many conferences, which took her all over North America. Her and her husband also took a cruise out to Alaska in 2006 to celebrate their 50th wedding anniversary together.

Marita enjoyed playing Radio Bingo and playing 31 with her children and grandchildren; where she would always win all the quarters back that she had loaned them. She also had a love for cooking and loved sharing her recipes with her grandchildren to carry on. Her most cherished memories were the times she was able to spend at her home by the river with her family and loved ones. Marita will be fondly remembered for her silliness, her strength, her welcoming manner to all and especially her kindness.

She is also survived by her sisters, Anna Lambert of Florida; Virginia Dionne of Buffalo; Mary Alice Cook and Cynthia Sawatis of Akwesasne and her special nieces Gale Rourke and Giselle Cook of Akwesasne; her godchildren and many nieces, nephews, cousins and friends.

In addition to her parents and her husband, Marita is predeceased by her daughter, Joanne M. Francis; her sisters, Dorothy Sawatis, Audrey Oakes, Isabel Rourke and Harriett Sciabarrasi; her brother, Nelson Sawatis; as well as her in-laws, Louis & Mary Sharrow Francis, Teddy & Julia Francis, Gerald and Clara Sharrow and Louis, Jr and Jackie "Butchie" Francis.

Friends called at her home beginning Thursday January 5th, 2023 until 10:00 AM Friday. A Mass was celebrated Friday January 6th, 2023 at 11:00 AM at the St. Regis Catholic Church with Rev. Jerome Pastores, celebrating.

Memorial contributions may be made in her memory to Tsiionkwanonsote Long-Term Care home in Akwesasne. Arrangements are with the Donaldson Funeral Home, Massena, where memories and condolences may be shared online at www.donaldsonfh.com.