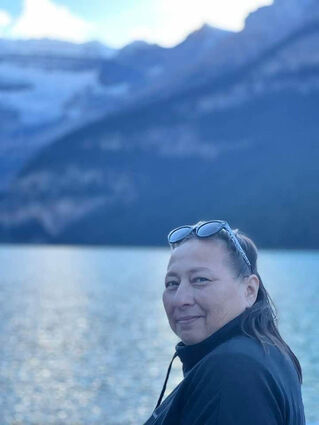 Akwesasne – Mary Catharine Gray (61), was called home at the Cornwall Community Hospital on Thursday, October 27th, 2022, after a brief illness.

Mary was born on October 21st, 1961, in Massena, NY, to Peter Burns Sr. and Mary (Dionne) Burns. Mary is survived by her loving husband of 39 years Phillip Gray Sr., her son Phillip Gray Jr. (Valene), her beloved grandchildren Bentley (Alexa), Gertrude, Vance, Steele, Jewel, and Serenity. She is also survived by her chosen sons Anthony Tillman (Leah), and his children Nylah, Wayne, and Tacoma; Blake Francis (Yvonne) and his children Silver, Tryson, Taycen, and Myah; Robert "Rocky" Francis (Makayla), and his son Rylyn. Mary is also survived by her Godchildren Roy Burns (Corrin), Brandi Square & Falan Bero (Dennis), and her siblings Peter Burns Jr, James "Spooky" Burns (Kimberley), Colleen Burns, Jolene Burns- Hernandez, Anna Burns, Alex Burns, Floanne Burns, and Fredrick Thompson and many nieces, nephews, and great and great great nieces and nephews of which there are too many to be counted.

Mary graduated from General Vanier Vocational School (GVSS) in 1980 and later attended St. Lawrence College where she earned her degree in Business. Mary went on to become a successful businesswoman who ran Truck Stop #9, Gray's Fuels and Gray's ATMs for many years, but her greatest accomplishment was being Tota Nanny to her grandchildren and several chosen grandchildren throughout the years. Mary enjoyed travelling the world with her husband Philip. The two travelled all over Turtle Island, making their way to China, Greece, Italy, Africa, Peru, Ireland and Hawaii to name a few and most recently celebrated their 39th year of marriage travelling to Newfoundland. The last of her travels was a recent visit to Calgary and British Columbia. Mary loved to attend all sporting events near and far, especially the ones her grandchildren, nieces and nephews were a part of. Mary was one of a kind and would help anyone in need without hesitation. She often took in family members into her home and was also known for the kindness and hospitality she showed to many Akwesasne children over the years. She was very well known in the community for her generosity, community spirit and her big heart. Lastly Mary enjoyed running out gas, despite owning a gas station.

A traditional funeral was held at her home on November 1, 2022. Burial was at the Kateri Cemetery.