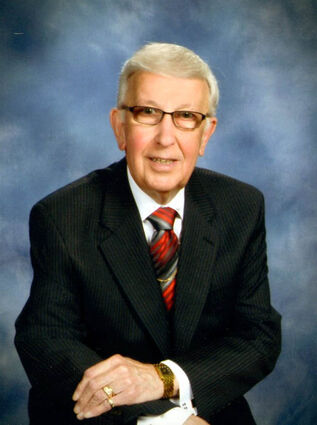 MASSENA – After a courageous battle, Bruce P. Bombard, 87, of Monroe Parkway peacefully slipped away in the early morning hours of Wednesday, October 26, 2022 at the home of his brother and sister-in-law, Sheldon and Connie with his chosen son, Brian at his side and under the loving care of Hospice.

Bruce was born in Massena on June 29, 1935, the son of the late Jerome L. and Violet (LaCombe) Bombard. He attended Raymondville school until 8th grade, when he went to the new Norwood-Norfolk Central School, graduating in 1953. On June 22, 1957, he married Joyce Ann Dufresne at St. Mary's Catholic Church with Rev. Edward Delaney, officiating. Joyce predeceased him on July 25, 2007.

Following his high school graduation, Bruce started his journey toward his lifelong passion of becoming a funeral director as he traveled to New York City to enroll at American Academy of Funeral Service graduating in 1955. While in school, he served his apprenticeship with the Fairchild and Sons Funeral Home on Coney Avenue in Brooklyn and worked at the Kirshenbaum Brothers Funeral Home also in Brooklyn. He returned to the North Country following his graduation and started his career with Vern Donaldson at the Donaldson Funeral Home in Massena, where he continued to serve and care for the many families of Massena, Akwesasne, and surrounding areas for 63 years until he stepped away from the day-to-day duties of the profession in December 2018. His continuous and dedicated service to his beloved funeral profession was only interrupted in 1958 when he was drafted in the US Army during the Korean Conflict. His time in the military didn't take him away from the profession though, as he was assigned to grave registry while he was stationed at Fort Lee, Virginia. He was honorably discharged in 1960 and returned home to Massena where he continued to serve the community.

Even though Bruce stepped away from the everyday of the Funeral Director profession, his calling in life to aid families at these most difficult times never stopped. Without any regard to recognition or request, he continued to emotionally assist so many families with visits, phone calls, correspondence and cards. He had a great love for all people and his profession throughout his life.

Equally important to Bruce was his faith, as he was an active and supportive member of St. Mary's Catholic Church. Throughout his life as a communicant of church, he served as an usher and lector, member of the Bereavement Committee, two terms on the Parish Council and as a Trustee in 1989. He was also the chairman of the cake booth for many years at the Annual Bazaar in November and led morning prayer at daily mass. It was because of his dedicated faith and service to the community that he was one of 33 honored by Bishop Terry LaValley and the Diocese of Ogdensburg with the Bishop Edgar P. Wadhams Award for Distinguished Service this past July. When Bruce wasn't helping others, he enjoyed playing cards, Scrabble, entertaining his family and friends, flower gardening, and many trips to Cape Cod to build his extensive collection of antiques.

Bruce is survived by his sister, M. Diane Bombard of Raymondville; his brothers, Ronald J. Bombard of Norfolk; and Sheldon J. Bombard and Connie Sleister of Massena; his chosen son and daughter-in-law, Brian and Jackie Eddy and their children, Megan, Tad, and Luc; his chosen daughters, Karen Reid Kalman, Erin Murphy and her husband, Rocky, and Kristin Murphy Case and her husband, Michael; his special cousins, Carter and Barb Montross of Massena and Brenda and Terry Pidgeon of Syracuse and his sisters-in-law, Theresa Dufresne and Jean Delisle.

In addition to his parents and his wife, he was predeceased by a sister-in-law, Rose Marie Bombard and a niece, Rhonda Bombard Lawrence.

As a tribute to his love to the Akwesasne Community and their appreciation for his dedicated service to them, Bruce was rested at the Akwesasne Homemakers Wake Center, River Road, Tsi Snaihne on Saturday, October 29th, where the Mohawk Choir honored him with a prayer service. Friends also called on at the Donaldson Funeral Home, Massena, where he gave so much of his time. A Mass of Christian Burial was celebrated on Monday, October 31st at the St. Mary's Catholic Church, Massena with Rev. J. Michael Gaffney, celebrating. Burial followed at the Pine Grove Cemetery.

Memorial contributions may be made in his memory to St. Mary's Church Memorial Fund or Hospice and Palliative Care of St. Lawrence Valley.

Arrangements are under the care and guidance of his friends and colleagues at the Donaldson Funeral Home, Massena where friends may share memories and offer condolences online at http://www.donaldsonfh.com.