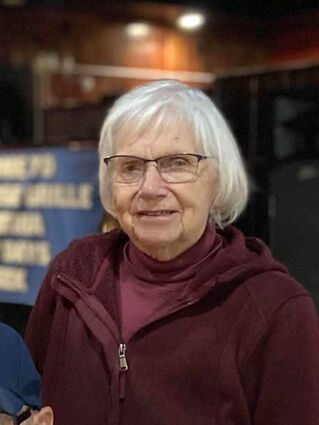 AKWESASNE – Elizabeth Kelly, 90, passed into the hands of the Lord on Thursday, September 29, 2022, surrounded by her loving family and the excellent help of Hospice of the North Country.

Elizabeth was born on April 10, 1932, to David and Katie (Herne) Jock at their homestead on Jock Road in Akwesasne. Like most people her age, she grew up in a relatively poor family and they operated a subsistence farm while their father worked at Alcoa. She felt she had a relatively happy childhood and never even realized that she was poor. She graduated 2nd in her class at Bombay High School and went on to graduate from Potsdam State Teacher's College. She was the first in her family to attend and graduate from college and was one of the first Mohawk teachers to return to this area to teach. She originally taught for two years at Pine Grove Elementary School in Massena and then began her 30-year association with Salmon River Central School system, all of which was spent at the St. Regis Mohawk School. She had an unbelievable memory and recollection of all the students that she taught and remembers many of them from Pine Grove School back in the mid 1950's. She certainly remembers many of the students she taught here in Akwesasne, many of whom still live here and are always anxious to share memories with her family.

In 1954, she married Benjamin Kelly and they recently celebrated their 68th wedding anniversary. They had three children who were their pride and joy and they spent much of their time around the various activities of their children. They were doubly proud of their five grandchildren and were very excited about all their academic, personal, and athletic activities. She was a huge sports fan especially of the Dallas Cowboys, Los Angeles Dodgers, and the Duke Blue Devils. She loved to read, do puzzles of all kinds, collecting teapots, and birdwatching. Not far from these enjoyments was traveling, having visited 49 states and many provinces of Canada. She was a member of the Kateri Circle and when her health allowed, she was very active with the St. Regis Mohawk Senior Citizens Club. She never turned down an offer to go to the casino.

Betty is survived by her loving and devoted husband of 68 years, Benjamin; her son, Benson and his wife Mary Kelly, her son Bruce and his wife Jocelyn Kelly, and daughter, Barb Kelly who lived with her and took outstanding care of her as her health failed. Additionally, she is survived by a special niece and nephew, Jan Herne and Joy Jock; her grandchildren, Anna, Abigail, Benjamin, Patrick, and Elizabeth; and a great grandson, Julian Gray. She is also survived by many other nieces and nephews who were very special to her, and she loved very much.

In addition to her parents, she was predeceased by her brother Les and his wife Laura Jock; sister Marietta Jock; sister, Shirley and husband, James Mainville; brother Tim and wife Corrine Jock; sister-in-law Marge and her husband Leonard Beaubien.

Arrangements were under the care and guidance of the Donaldson Funeral Home, Massena, where friends and family called. A Mass of Christian Burial was celebrated at St. Regis Catholic Church with Rev. Martin Cline celebrating. Burial was at St. Joseph's Cemetery at the convenience of the family.

Memorial donations may be made in Elizabeth's memory to the St. Regis Mohawk Senior Citizens or Hospice of the North Country.