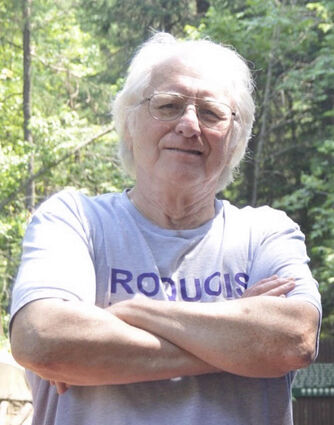 John David Kahionhes Fadden, 83, of Onchiota, NY was born on December 26, 1938 in Massena, NY, the only child of Ray and Christine Skawennati (Chubb) Fadden. He was raised in Hogansburg, NY where he attended the St. Regis Mohawk School and the White School, later graduating from Massena Central High School in 1957. John excelled in Art at an early age, enrolling at the Rochester Institute of Technology after high school, where he was awarded his bachelor's degree in Fine Arts in 1961. Upon completing his education, he found employment teaching 7th and 8th grade Art at Saranac Central School District until his retirement in 1994.

John's greatest pride was his family, and he met the love of his life Elizabeth Eva Karonhisake Thompson of Akwesasne in 1962. They were married in 1965, which he always said, "was the best decision he ever made." They later settled in Onchiota, NY to raise their three sons, Donald, David, and Daniel.

Alongside his parents Ray and Christine Fadden, John helped establish the Six Nations Indian Museum (now the Six Nations Iroquois Cultural Center) in Onchiota, NY which opened to the public in 1954. Thus, began a lifelong effort to educate visitors to the Adirondack Park about the rich and vibrant culture of the Haudenosaunee (Six Nations or Iroquois). During every summer season since its opening, John was on hand, telling stories, giving historical lectures, answering questions and simply chatting with all who visited the cultural center. John was always willing to inspire other artists and encourage them on their path by sharing his artistic and cultural knowledge.

In addition to being a well-respected culture bearer, John was a world-renowned artist with his illustrations and artwork appearing in over 90 publications, films and periodicals. His work as an artist depicts aspects of Haudenosaunee culture and history, as well as the flora and fauna of the mountains he called home. His fine art has been exhibited in numerous shows from New York City to Rotterdam, Holland. His expertise in Haudenosaunee history and culture has been sought out for various documentaries and films, including the Discovery Channel, PBS, and National Geographic among many others. More recently he served as a consultant for the television series Outlander. His extensive cultural knowledge was sought out by several committees and boards on which he sat, such as the NYS Museum, the NYS Education Department and various other foundations and museums.

John Kahionhes Fadden passed on to the spirit world on August 12, 2022 after a brief illness. He leaves behind his loving wife of 57 years, Elizabeth Eva (Thompson). His three sons, Donald, David (Margaret), and Daniel (Kim). Beloved grandchildren Wishe, Ian, Evan, Hailey and Amber. His brother-in-law, Daniel Thompson, and sisters-in-law Mary (Lillian) LeFebvre and Marita Thompson, as well as many nieces, nephews, cousins and cherished friends. He was predeceased by his parents, Ray and Christine.

Funeral arrangements are in care of the Fortune-Keough Funeral Home in Saranac Lake. As per John's wishes, there were no calling hours or funeral services. Donations in memory of John Kahionhes Fadden can be made to the Tri-Lakes Humane Society, Inc., 225 George H. Lapan Memorial Hwy., Saranac Lake, NY 12983.