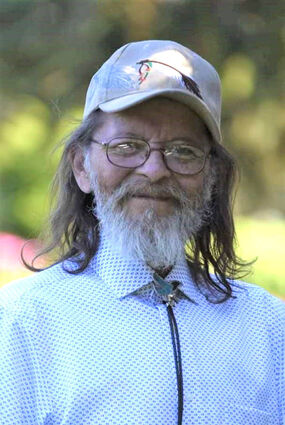 KAWEHNOKE - Lloyd William Skaroniati Benedict, age 64, of 855 Island Road of Kawehnoke, passed away on Monday, August 1st, 2022, in the loving arms of his family.

Lloyd was born on January 18th, 1958, to Ernest and Florence (Hopps) Benedict. On April 1st, 1994, he married his teenage sweetheart, Donna Benedict in a small civil ceremony at Massena Town Hall.

Lloyd (or "Lloydy" as most of his closest friends and family called him) was a devoted husband and loving father. He was also a determined, hardworking man, who held a deep love for his community of Akwesasne. He served as chief for Mohawk Council for twelve years between 1982-1994 and was a co-founder of the CKON radio. He was very caring for the environment and the impact it had on First Nations. He owned and operated a sawmill; as he had a vast knowledge of tree species, their uses, and wood lot management. He was a Policy Analyst on environmental issues concerning First Nations People, promoting the Drinking Water Safety Program. Also, he was a consultant for Eastern Ontario Model Forest Inc and worked in Mexico with the aboriginal peoples there. For his hard work in the environmental field, in 1999, he received a "Mishtapew Award" from the First Peoples Business Association. After many years of research, along with his wife, they opened and operated a state-of-the-art enclosed fish farm, Ekohawk. A college-accredited course in aquaculture was given there, with 8 graduating community members. He served as a member of the board of directors of the Canadian Centre of Excellence in Aquaculture as well. He also had an impact in other fields. As he was a board member of the INAC Opportunity Fund, and he published an issue of "Nation Indian" on the first assembly of AFN. Recently, he continued with his environmental work and was a board member for the South Nation Conservation. Along with being a director on the board of the Onake Corporation.

Lloyd is survived by his wife, Donna Benedict: their five children, Patrick Benedict (Natasha) of Massena, Samantha Tijam (Marco) of Borden, Julia Benedict Edwards (Raienkonnis) of Hogansburg, Katelyn Benedict (Terry) of Cornwall, and Jessica Benedict of Cornwall; his two grandchildren, Kennedy and Ethereal; his siblings Rebecca Benedict of Kawehnoke and Daniel Benedict (Maureen) of Snye; his aunts Alice and Elda; and numerous nieces, nephews, and cousins.

In addition to his parents, Lloyd was predeceased by his sister, Salli Benedict, and grandson, Cohen.

Friends are invited to call at 2012 Pitt Street, Cornwall on Thursday beginning at 1:00 pm until 11:00 am on Friday. A private funeral will be held at the convenience of the family.

In remembrance of Lloyd's life, the family asks that charitable donations to be made to local animal shelters in his name in lieu of flowers.