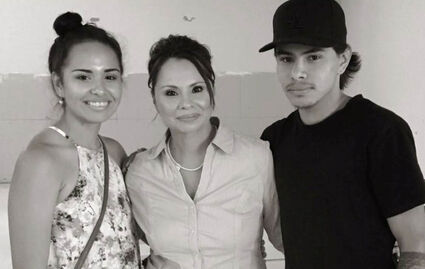 Saint Regis Mohawk Tribal Police Detective Sergeant Karonienhawi Thomas, pictured with her children Marcella and Quentin, was appointed by U.S. Secretary of the Interior Deb Haaland to the Not Invisible Act Joint Commission on Reducing Violent Crimes Against Indians.

AKWESASNE – The Saint Regis Mohawk Tribe is pleased to congratulate Tribal Police Detective Sergeant Karonienhawi Thomas on her appointment by U.S. Department of the Interior (DOI) Secretary Deb Haaland to the Not Invisible Act Joint Commission on Reducing Violent Crimes Against Indians. Her appointment was announced during a live video event hosted by DOI on May 5th to mark the National Day of Awareness for Missing and Murdered Indigenous Peoples.

As a member of the Not Invisible Act Commission, Detective Sergeant Thomas will enlist her experience in addressing unsolved cases by, "Disrupting the pattern of violence with everything we have in us. Those moments of perseverance were never accomplished by one person, it was always a collaborative effort by several agencies, family members and community advocates; building bridges and pathways to wellness through consensus. I am honored by the appointment and the opportunity to represent our community."

The Not Invisible Act was sponsored by Secretary Haaland when she served as Congresswoman and helped lead its passage by Congress in October 2020. The Act mandated the creation of a commission comprised of representatives with diverse experiences, backgrounds, and geography. It includes tribal, state, and local law enforcement; health care and mental health practitioners; urban Native organizations dealing with violence against women and children; Indian survivors of human trafficking; and family members of missing and murdered Indigenous people.

Working in coordination with the U.S. Attorney General, members that Secretary Haaland appointed to the Not Invisible Act Commission will help convene hearings, take testimonies, and receive evidence in order to develop recommendations for the federal government to combat violent crimes against Native Americans and Alaska Natives (AI/ANs). The commission will also help improve intergovernmental coordination and establish best practices for law enforcement to address cases of missing or murdered persons and the trafficking of Native people.

Joining the Tribe in extending remarks, Tribal Police Department Lieutenant Decota Thompson shared, "It is with great pride that I congratulate Karonienhawi and my hope is that she is able to share her expertise with a much greater audience. She has made it her life's work to help victims of crime and she does so with the fervent devotion and commitment that is unmatched. As her supervisor, I am proud of the officer she has become and I take pride in having been able to support her throughout her career. Congratulations Hawi. Our community and department are lucky to have you."

Detective Sergeant Thomas is a 13-year veteran of the Saint Regis Mohawk Tribal Police Department and has earned two Master's Degrees from St. Lawrence University: Mental Health Counseling (2019) and Educational Leadership (2015), with specialized certification in School Violence and Conflict Resolution. She is a 2006 graduate of SUNY Potsdam and received a Bachelor's Degree in Psychology.

During her time with the Tribal Police Department, she has been an investigative member of the Criminal Investigation Division before being promoted to Detective Sergeant in 2016. She helps advocate for raising awareness and prevention of violence, sexual assault, and major crimes against Native American women, children, and families. She is a certified Crime Scene Technician, a forensically trained child interviewer, and instructor for Law Enforcement Cadets in the area of Domestic Violence with the Zone 9 Police Academy in Plattsburgh, New York.

"Through my years of service; I have witnessed families, children, and individuals be pulled out of the darkest places by the unconditional love of family and the dedication of service providers, officers, leaders, caseworkers and advocates. That is what gives me hope that the answers to this epidemic raging over our people is within the reach of this generation's grasp," shared Detective Sergeant Thomas.

She has given congressional testimony at the Bipartisan Task Force to end Sexual Violence, presented at the Northeast Tribal Conference on Child Victimization that was convened by the New York State Children's Alliance, the Sexual Assault Prevention and Intervention Conference hosted by The New York State Coalition Against Sexual Assault, helped facilitate workshops that focused on sexual assault at Syracuse University, and is an regular speaker to Akwesasne youth at the annual Ohero:ken Rites of Passage Ceremony.

Detective Sergeant Thomas also serves as a Board Member for the Seven Dancers Coalition that strives to educate and restore traditional values aimed at strengthening harmonious and respectful relationships in Indigenous communities.