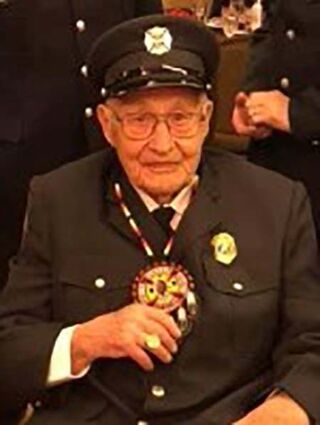 Jack was born on January 21, 1925 in Weehawken, New Jersey, the son of the late Frederick and Florence Ann (Bartlett) Treptow. He attended schools in New Jersey, graduating from East Rutherford High School. Following high school, he entered the US Army Air Corp, proudly serving his country during World War II. He was honorably discharged as a Corporal with the 2140th Base Unit on February 17, 1946. He continued his education at a new college in the Adirondacks – Paul Smith's College. He was a proud member of the first graduating class in 1948. It was while in the Adirondacks, he met Shirley M. Norman, whom he married on September 11, 1948 at the Keese Mill Presbyterian Church in Paul Smiths. Shirley predeceased him on May 21, 1997.

Jack first worked Emporium Lumber Company in Conifer, New York from 1948-1950. In 1959, he started with General Motors, where he was a tool and die maker, retiring in 1987. In 1985, Jack opened Treptow's Fine Woods in Hogansburg and was proudly still operating the business. Jack had a strong commitment to his community and on October 13, 1959, he joined the Hogansburg Akwesasne Volunteer Fire Department, once serving as their Chief. In 2019, he was proudly honored for his 60-year commitment to the department and community. Jack was also a life member of the Andrew W. Cook American Legion Post #1479. A woodsman at heart, he greatly enjoyed doing woodworking and building his train.

In addition to his wife and parents, he was predeceased by a son, Richard Treptow on January 26, 2001.

Friends called on Monday from 4-8:00 PM at the Hogansburg Akwesasne Fire Station, where funeral services were held on Tuesday at 10:00 AM. Burial will be in Brookside Cemetery, Bloomingdale.

In lieu of flowers, those wishing may consider memorial contributions to be made in his memory to the Hogansburg Akwesasne Volunteer Fire Department.

Arrangements were under the care and guidance of the Donaldson Funeral Home, Massena, where friends may share memories and offer condolences online at http://www.donaldsonfh.com.