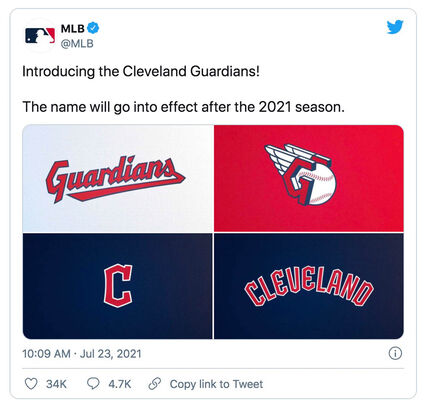 Down goes another Native-themed mascot.

Since 1915, Cleveland's Major League Baseball team has been known as the Indians. The team is now renamed the Guardians.

The ballclub announced the name change Friday - effective at the end of the 2021 season - with a video on Twitter narrated by actor Tom Hanks. The decision ends months of internal discussions triggered by a national reckoning by institutions and teams to permanently drop logos and names considered racist.

The choice of Guardians will undoubtedly be criticized by many of the club's die-hard fans.

The organization spent most of the past year whittling down a list of potential names that was at nearly 1,200 just over a month ago. But the process, which the club said included 140 hours of interviews with fans, community leaders, front office personnel and a survey of 40,000 fans.

Team owner Paul Dolan said last summer's social unrest, touched off by the killing of George Floyd in Minneapolis, spurred his intention to change the name.

Dolan said the new name mirrors the city and its people.

"Cleveland has and always will be the most important part of our identity," he said in a statement. "Therefore, we wanted a name that strongly represents the pride, resiliency and loyalty of Clevelanders. 'Guardians' reflects those attributes that define us."

"It brings to life the pride Clevelanders take in our city and the way we fight together for all who choose to be part of the Cleveland baseball family. While 'Indians' will always be a part of our history, our new name will help unify our fans and city as we are all Cleveland Guardians."

Dolan is expected to provide more details on the choice and background on the change at a news conference at Progressive Field before the Indians host the Tampa Bay Rays.

Many are celebrating Cleveland's big move, including Amanda Blackhorse, Diné, who fought against Native-themed mascots.

"This victory belongs to the Native people and organizations within Cleveland who have been fighting this issue for decades," Blackhorse said. "Although this change should've happened decades ago, I hope other franchises like the Kansas City team and the Atlanta team can learn from this and move away from Native mascots and slurnames."

Suzan Harjo, Cheyenne and Arapaho and Muscogee Nation, who also fought on the frontlines said, "It's long past due but had to be done, and at least they're not the last ones standing. And this should be a good lesson to the other few pro sports teams that still have these offensive names, behaviors, images and mascots."

Harjo hopes the team will be sincere and make amends to Natives in Cleveland. "Don't bother apologizing, Cleveland, just take this next step and devote a fair percentage of the profits to Native peoples and starting right there in the home area," she said.

"It is a major step towards righting the wrongs committed against Native peoples, and is one step towards justice," said Crystal Echo Hawk, executive director and founder of IllumiNative.

"The long practice of using Native American mascots and imagery in sports team has been harmful to Indigenous communities," she tweeted. "This is a welcome and necessary change."

Some are upset about mascots moving away from Native people, like Oklahoma Rep. Markwayne Mullin, because it's "erasing history and traditions."

"As an enrolled member of Cherokee Nation, speaking for myself, I have never been offended by the use of Native American mascots in sports," the Republican congressional member wrote on Facebook. "They have been held in high esteem and given people something to rally behind. Political correctness is erasing history and traditions."

According to Cleveland baseball history, the Indians name was chosen in 1915 to honor Louis Sockalexis of the Penobscot tribe who played for the then-Cleveland Spiders in 1897, reported Indian Country Today. Joe Posnanski of NBC Sports, however, found in 2014 that the name was actually the creation of a group of sportswriters in 1915. Looking to renew fan interest in the poorly performing Cleveland Naps, sportswriters at the Cleveland Plain Dealer and other newspapers created a "nomenclature committee" and sponsored a contest in which fans could choose a new name for the team.

"The Sockalexis story was entirely untrue, a bit of state funded propaganda to conceal the obvious fact the Cleveland team was named the Indians only to capitalize on the many racist clichés that could be used to promote the team; it was a glorious opportunity for hilarious Native American jokes and race-specific clichés and insults that fit well in headlines," Posnanski wrote.

Cleveland is the latest professional team to move past racial slurs. It follows last week's news from the Washington Football Team when team president Jason Wright announced the team is moving on from any connection to a Native-themed mascot.

"We've made significant changes in our organization and our culture, and our new name must reflect these changes," Wright wrote on the team's blog. "To that end, we will choose an identity that unequivocally departs from any use of or approximate linkage to Native American imagery."

Wright was one of the first hires after the name change announcement last summer and is the first African American team president in league history. Olympic gold medalist Jim Thorpe, Sac and Fox and Potawatomi, was the first president of the league, known then as the American Professional Football Association.

In 2018, the Indians stopped wearing the contentious Chief Wahoo logo on their jerseys and caps. However, the team continues to sell merchandise bearing the smiling, red-faced caricature that was protested for decades by Native people and groups.

The name change has sparked lively debate among the city's passionate sports fans. Other names, including the Spiders, which is what the team was once called, were pushed by supporters on social media platforms.

Cleveland's new name was inspired by two large landmark stone edifices near the downtown ballpark – referred to as traffic guardians – on the Hope Memorial Bridge over the Cuyahoga River.

The team's colors will remain the same, and the new Guardians' new logos will incorporate some of the architectural features of the bridge.

Billy Mills, Olympic Gold medalist and Oglala Lakota spoke out on the decision of the Cleveland baseball team to change their name and imagery to the Cleveland Guardians after years of controversy.

"It's never too late to do the right thing," said Mills, national spokesperson of Running Strong for American Indian Youth. "The beginning of the Tokyo Olympics meant today was already a day of global reflection on the power and importance of athletic excellence, even in these most challenging of times. Now today will be a new beginning for the storied Cleveland baseball team, one without a tarnished legacy of Native caricature.

"The Cleveland Guardians are righting a historic wrong and have the chance to define this team's legacy as one of both inclusion and excellence."