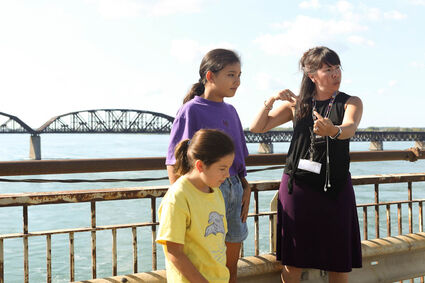 Director Tracey Deer is quick to point out the film is more about the protagonist coming of age than the event itself. Yet, in the same breath, it's the events in life that shape the 'coming of age' and sometimes forever.

First and foremost – it's a story made by Indigenous people, about indigenous people. Secondly, in Deer's own words, the 'film is semi-autobiographical'. In short: Beans is a sweet natured and smart as heck girl trying to find her place in her community all while her family plays an active role in a contentious stand-off between Kanesatake people and the Quebec government in 1990.

"Beans" is played by our very own Kawentiio, who will be featured in an interview in next week's issue of Indian Time newspaper.

The film is not a documentary, but still the movie is steeped in Deer's own personal moments and memories, taking her eight years to write the script, Deer says she's still processing that time in her life. She didn't want the film to be a documentary, but more about 'compassion, understanding, and to humanize' experiences saying, 'human beings experience these things and the effects we have on people.

She said, "For us to change the trajectory. How do we make sure this does not happen again thirty years from now? In the most basic sense, it's about a little girl and her family and how it's laid out for the world. The film allows Canadians to see what it is like to be Indigenous in this country. This is one film, one perspective. There are many, many more. I would love to see other stories, of their experiences, to reflect on who we are."

'Beans' will be shown in theaters in Quebec on July 2 in English at: Cineplex Forum (VOA), Cineplex Laval (VOA) and Cineplex Angrignon (VOA). It will all be shown in English with French subtitles at: Cinema Beaubien (STF), Cinema du Parc (STF) and Cinéma Le Clap Sainte-Foy (VF + STF).