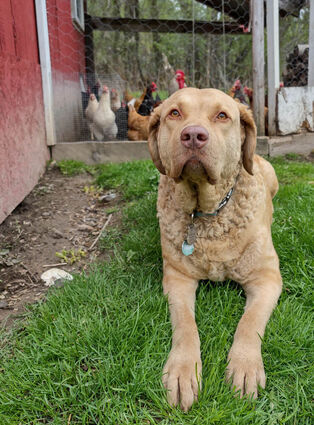 Raising chickens and having dogs can sometimes seem like an impossibility. Anyone who has raised chickens and had an intruder in the chicken coop or chicken run can attest to the devastation that predators, such as dogs, can have on a flock. Although it may not be possible to protect the flock from all wild and domestic creatures that wander into the yard, it may be possible to work with your own pet dog to get them to live in harmony with your flock. Here are some lessons that I have learned over the last 4 years raising chickens while keeping a family dog.

1). Train your dog: one of the most important pillars of dog ownership is training. Basic training for any dog helps to establish authority and reinforces positive behavior. Some basic commands include sit, stay, and heel. Before I considered introducing my dog to my chickens, I worked on training him with an additional command, called 'leave it'. This is a command that I use whenever I want my dog to avert attention away from a stimulant, such as a flying, squawking chicken. Most dogs' instincts are to chase anything that moves, so building our relationship through training and using the 'leave it' command has helped immensely in those times where my dog finds himself head-to-head with any one of my chickens.

2). Know your dog: Do you know when your dog is excited? Do they bark, whine, shake? Each dog is different, learn your dog's cues so that you know when they are getting too excited. Overexcitement can lead to accidental problems around chickens. Once you know how your dog reacts around a stimulus you can start countering their behavior using commands like 'leave it' and redirecting their attention to something else. Do you know what rewards grab your dogs' attention most? Treats, affection, or a certain toy? When your dog starts to get overexcited you can use the 'leave it' command and redirect their attention to a treat or toy they find rewarding.

3). Introduce them early: I already had an established flock for about a year and a half before I got a puppy. In addition to training him with additional commands, I knew that regular controlled exposure to my chickens would help desensitize my dog to the flock. I got some baby chicks and with my dog on a leash I allowed him to examine and sniff at them from a distance. I would repeat this for each feeding time. When it was time to move them into the larger coop, I repeated the exposure practice with my dog on a leash and the chickens in their run. I paid attention to my dog's reactions around the flock and would use the commands if he got too excited and redirected his attention using his favorite dog treats.

4). Never leave your dog unattended around your flock: in the beginning my dog was introduced to chicks in an indoor environment under close supervision. Gradually he was moved up to being outdoors with the flock, in the run at first, and then finally loose in the yard. My chickens are free range and when they are let loose, I put my dog on a time out. I would always monitor their interactions. Over time the chickens became desensitized to the dog and would venture closer, and because my dog was tied up he was unable to chase them. He would bark a lot at first but has become so accustomed to chickens in the backyard they do not faze him anymore.

5). Realize not all dogs are going to be compatible with chickens: some dogs were bred to hunt birds and other small game. Their instincts might be impossible to silence around chickens. This is especially true if you adopt an adult dog with already established behaviors, or if your dog has ever killed a chicken or small animal in the past. In these instances, it may be necessary to keep your dog and your flock separate at all times. My dog is a retriever and is categorized as a bird hunter. Even though he is trained and was practically raised around the flock, I still would not trust him unsupervised around my chickens because I know he is easily excitable and just LOVES to chase if not corrected.

Raising chickens with a dog can be possible with consistent training in a controlled environment. It is up to you and how well you know your dog to decide how much exposure to the flock would be safe. Having a dog that you know you can trust around your flock helps to alleviate a lot of stress, also knowing how to keep them apart if necessary, can have the same effect. Good luck and happy chicken raising!