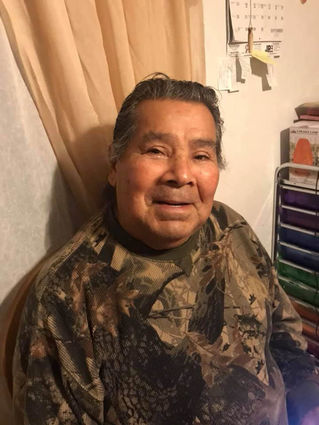 He served in the Military, 101st Screaming Eagles, Division of the Army in the later 1950's.

On December 24, 1960, he and his loving wife were married, this year they would have celebrated 60 years together.

This "Elders of Tuscarora" interview with 'Jay' was published on September 18, 2020.

After the War of 1812 John Squires had a reunion in an area of Lockport. His commander had been a General Obediah. John took this last name; at that time it was considered an honor. This is the origins of the last name Obediah among my deer clan people.

My father Morley, also called Moyer, moved here when he was about 16 from Six Nations territory in Canada. His mother died when he was born and when he was 10 days old his father gave him up to a woman at Six Nations to raise. Duane (Ducky) Anderson's mother, Martha Thompson Anderson, took him in until he met my mother. He died at 69 of a heart attack or stroke.

My mother Hazel was a good person, she was loved by everyone. She was the PTA President for many years even long after she no longer had children at the school. When I was acting up it gave her a black eye and she gave up her long-held PTA position. She passed away at 46 after suffering a stroke.

I was born and raised in the house at my family's homestead on Chew Road, the house is still there by Able Auto. My father was an ironworker. My siblings were Darrell Clause, Marla (Clause) Laughing and Turhan Clause.

When I was born Dr., Pierce came to help with my delivery. My dad wanted me named after him. The doctor asked my dad what my name was to be. My dad said Junior after me. On my birth certificate my name says Junior Clause. So, all through school I was Morley Jr. but in the Army the military went by my birth certificate. It even says Junior Clause on my dog tags. This is why I was J Clause.

As a kid I always had long hair way down my back. Quinnie Printup used to tease me and call me girlie. So, I refused to go to school until I got a haircut.

I went to Tuscarora School and then to Niagara Street School, middle school was at Gaskill. I went to Trott and took machinery and millwright and never scored lower than a 95%. I left school at 17 to Join the Army; my mom had to sign for me to enlist.

In 4th Grade at Niagara Street, I had a teacher named Miss Buchanan. She had been to Japan and studied the language and culture. She taught our class to count to 10 in Japanese. To me it sounded a lot like Tuscarora and I still remember most of counting to 10 in Japanese.

I once had a run in with Harry F. Abate at Niagara Street School. My teacher there Mr. Joseph often requested that I wash my hands because they looked dirty. My hands were often chapped due to the weather and looked dusty. I went home and told my mom that the teacher kept telling me to wash my hands when in fact they were already clean. She told me to tell that teacher to mind his own business in not the politest of terms. So, the next time Mr. Joseph asked me to wash my hands in the lunchroom I told him exactly what my mom had told me to say. A scuffle ensued and my mayonnaise sandwich went flying and I was sent to the principal's office who was Harry F. Abate. He asked why I was there, and I told him just as my mom had told me to say it. He had a little smirk on his face and on hearing about my lost mayonnaise sandwich he offered me his lunch which I refused on principle, but Mr. Joseph did not bother me anymore.

I got my first kiss at Niagara Street school from a little Polish girl whose name I don't remember but I still remember the Polish words for Give me a kiss! I asked Theresa out on our first date when we were in 8th grade but she turned me down.

Some of the friends I had growing up were Tracy and Crandy Johnson, Jerry Chew, Sonny Roundman Jacobs and Roland Heavy Dough Printup.

I always looked up to and respected my father. My dad helped me get into the Iron Workers Union. He took me to Canada and I got a union book for $10 and learned my trade by watching what I needed to do and on the job training. I joined the Iron Workers around 1960. My dad was strict and if he figured you needed a whipping you got one. I remember my father and other men out here having boxing matches in the garage where Clem lives now. When I was about 7 or 8 my dad took me to the Boy's Club in Niagara Falls and signed me up for boxing, so I learned to box.

I wasn't a bully, but I would single out a bully if they were picking on any of our native boys. I'd set them up and let them pick on me and then I'd work them over.

I was in the 101st Airborne Division of the Army. I had basic training at Fort Jackson, SC, and Jump Training (parachute) at Fort Campbell, KY. I was in the Army for 2 years and I liked doing my time.

Since the pandemic has hit, we have had no AA meetings. I have been sober for 52 years and we started AA at 7 Clan 43 years ago.

Theresa told me you better quit drinking or hit the road and I didn't want to lose her. I knew I had a drinking problem, but I didn't know what an alcoholic was. I am not a reformed drunk but an informed drunk and that's a big difference. I have a disease called alcoholism. I cannot take one drink of alcohol or it triggers a compulsion to keep drinking.

Many times, I tried to quit drinking. I had my last drink on November 22, 1967, it was Thanksgiving Eve. We had just finished capping off the Erie County Savings Bank in Buffalo and we went out to celebrate. My friend Joe Kollarand (Kooky) wanted me to spend the night at his house, but I knew I had to get home for Thanksgiving. I woke up on the thruway outside of Buffalo. I started walking and ended up home on Thanksgiving morning at 10:00 a.m.

Theresa had tried getting our doctor to give me medicine that would make me sick if I drank. The doctor must have had some type of experience with alcoholism and told her that I needed to go to AA. He put us in contact with Bill Suslovitch in Lewiston who was an active member. He asked if I could quit drinking for one night and I said I could. He told me where the meeting was the next night and said he would meet me there.

My first AA Meeting was with the Whirlpool Group and it was a discussion meeting. It went right over my head, I thought they were all arguing. I was trying to quit for the rest of my life. In AA we quit for one day at a time. If you can quit for one day, then you try again to quit the next day. This is how my sobriety started. I was sober 10 years before I started AA at 7 Clan. Originally Harry Hill, Udy Printup, Ray Ranouf and I started right here at this table.

Every door was open for us. All the churches, the school, the Council House open for us to use and meet at. Through my experience all those places had their priorities that could displace us from meeting if someone had need of the church or school. So, I asked Ted Williams about 7 Clan and asked if we could use it for 1 day. The first meeting there we had 21 people, the smallest meeting we ever had was 3 people. Now on average we have 100 people attend. During our Day of Sharing one of our members who was a pyromaniac burned the 7 Clan building down. We had a Day of Sharing fundraiser to rebuild and we fed 1200 people. We had enough plates for 1,000 people and had to go out and get 200 more. It took us a year to rebuild and during that time we used the Council House for our AA Meetings.

I used to tell my mom that I would never see 21 and she always said Oh, you'll see a long life. I don't know how she knew this. My parents died young and my brothers and sister are gone now all at a relatively young age.

The happiest time of my life was traveling all over with Theresa and my family. We have been to every state including Hawaii and Alaska. Sometimes flying but mostly driving everywhere. We also spent 21 days in Europe with a group of natives on a cultural trip; that was a great time. What a great thing to see the Eiffel Tower and ride up a cable car to the top only to find other natives on top seeing the sights who were from all over the U.S. It was beautiful.