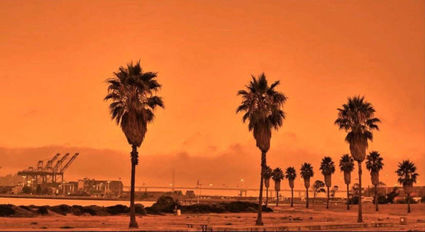 The air quality shown in this photo is with hazy and leaden skies.

As fires rage on the West Coast, an Akwesasne Mohawk and his family struggle to make sense of the near apocalyptic world around them. According to CNN as of Wednesday, September 16, 2020 the latest reports 'at least 35 people have died in the West Coast wildfires, including 24 in California, 10 in Oregon and a child in Washington state'.

As large swaths of Oregon, Washington state and even parts of British Columbia in Canada, are experiencing "hazardous" air quality. EPA says the air quality in Salem, Oregon's capital is so bad they are recommending people need to stay indoors and reduce their activity levels.

Roger 'Sosakete' Perkins moved to California several years ago to be part of an art scene unrivaled in east, the fantastic weather and laid-back atmosphere. That was before Climate Change started to immediately and severely affect wildfires.

Perkins remarked, "I feel like we are just saturated with toxic air! And it's been going on for 5 weeks now. Now we are getting smoke from Oregon that will linger for another month or longer. We are all experiencing headaches and sore, itchy throats. Even though we stay indoors, air still has to enter our homes. Then there's the mental and emotional impact of being in what feels like an apocalyptic environment!

In past years, wildfires in Oregon have consumed about 500,000 acres in the state. According to Oregon's governor, "This week alone, we burned over a million acres of beautiful Oregon". It is unprecedented.

Smoke from the wildfires makes air quality unhealthy, which can irritate lungs, cause inflammation and affect the immune system and heighten the risk of lung infections such as coronavirus.

Air quality isn't the only thing being affected – as wildfires burn, the cost of living is rising in a state known for the high cost of living. 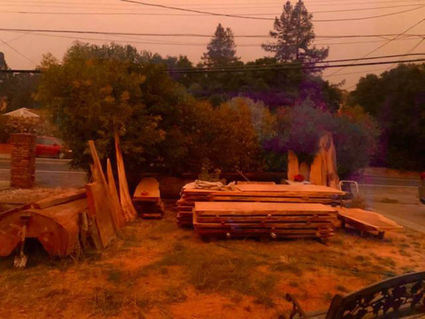 Not far from his home, fires continue to burn.

Perkins added, "The cost of everything is increasing in the Bay Area because of the fires and Covid-19 and we decided in August that we are not going to wait any longer to move out of California. It is too toxic to work outside on my carvings, large paintings and furniture. We feel trapped and on edge, so it is very difficult to be creative and produce art in a safe space. All festivals, art shows and venues are non- existent, causing my artist income to be significantly lower.

Perkins and his family live in the east bay of San Francisco in a highly wooded area that is very dry, so it is definitely a danger to them. They have not evacuated but are prepared to do so if needed.

Perkins and his family plan to move to the Southwest where art venues are abundant.

He stated, "We are only able to move because of family, friends and clients who have generously donated and purchased art from me".