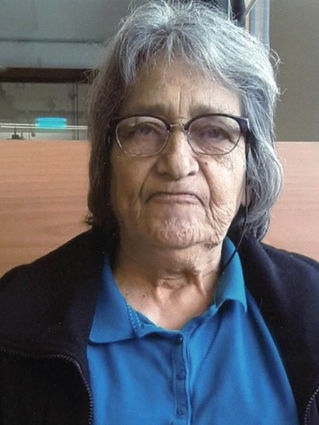 Marie was born at her family home in Kanatakon, on May 1, 1944, daughter of the late Joseph and Charlotte Mitchell Diabo. She attended St. Andrew's Day School and on May 6, 1961 she married Joseph Johnson at the St. Regis Catholic Church. Joseph predeceased her on June 14, 2013.

She was a communicant of the St. Regis Catholic Church and worked at a custodian for the Mohawk Council of Akwesasne, and previously worked at Sesi Buckshot's Store. She loved cooking, baking pies and watching cooking shows. Marie always enjoyed playing radio bingo, going to the Casino and especially sitting on her porch talking and visiting with family and friends.

Besides her parents, Marie was predeceased by her husband Joseph; two daughters, Sharron M. Johnson, and Bonnie Johnson, and a child in infancy; her brother Kenneth Diabo; and sisters Marjorie Lazore and Elizabeth Mayo; and three grandchildren, Amanda, Ashley and Jeremy.

Friends may call Monday 1-5:00 at the Donaldson Funeral Home, Massena, where a funeral service will be held at 5:00 PM. All services will be attendance controlled with social distancing observed and face coverings required.

The family has requested that donations made in Marie's memory be directed to the funeral home.

Condolences may be shared online at http://www.donaldsonfh.com.