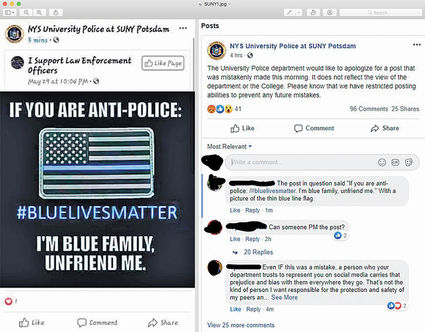 The SUNY Potsdam University Police 'mistakenly' (as they put it) posted a #bluelivesmatter meme, left, and then removed it Sunday, May 31. They have since prevented people from republishing the post/meme in the comments on the thread. At right is a screenshot of the original apology from SUNY Potsdam Police.

POTSDAM. SUNY Potsdam Police have come under fire for sharing a Blue Lives Matter meme on its Facebook page. The post went up on May 31, the same day that about 100 people gathered in downtown Potsdam for the first of two racial j...