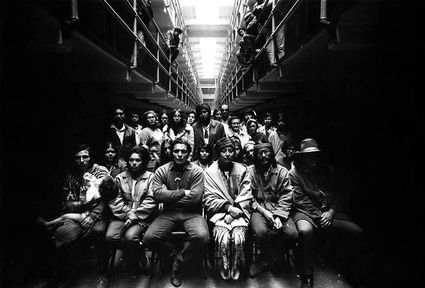 Indians of All Tribes celebrated the 50th Anniversary of the historic takeover and occupation of Alcatraz in 1969. The event was celebrated with four days of prayer, ceremony, speakers, and entertainment beginning November 20 through November 23, 2019, on Alcatraz Island in conjunction with the National Park Service.

The event was intended to bring together veterans of the occupation and to educate visitors to the island about the history and struggles of the American Indian. Led by student activists, Akwesasne Mohawk Richard Oakes and from San Francisco State and LaNada WarJack from UC Berkeley, with fourteen American Indian student activists initiated the takeover on November 9, 1969. On November 20, 1969, an additional eighty-nine Indian occupiers that included entire families, joined them on the island.

The activists relied on federal policy and a provision of the 1868 Treaty of Fort Laramie that authorized Indians to settle land unused by the federal government. Alcatraz, formerly a federal prison, was closed under the Kennedy administration in 1963; therefore, the unused land fell under the provision of the Treaty that provided for resettlement by Indians. The students seized the land not only as a political statement but a cultural one. They sought to develop an environmental and cultural center and a school that would allow them to teach native languages and customs to preserve the cultural heritage that had been denied them by government programs that practiced forced assimilation.

The takeover and occupation, which attracted a groundswell of support from across the nation, lasted nineteen months ending on June 11, 1971. The activists asserted their resolve for self-determination. During this time, there was a marked increase of American Indian militancy across the nation that attracted the attention of President Nixon. Nixon later signed fifty-two legislative measures to reform some of the grievances addressed by the protestors such as the Indian Termination Act of 1953, which ended federal recognition of Indian tribes, disbanded tribes, and allowed tribal land to be confiscated and sold. His successor, Gerald Ford, championed Nixon's last piece of legislation, The Indian Self-Determination and Education Assistance Act, which was signed in 1975.

Today, Native Americans are fighting for a greater voice on the American political stage. Major issues such as the Keystone XL, which affect tribal sovereignty and water rights, are a serious environmental threat to tribal lands, and the ongoing disappearances of American Indian women continues to be a pervasive threat with no end in sight.

"The success or failure of the occupation should not be judged by whether the demands of the occupiers were realized. The underlying goals of the Indians on Alcatraz were to awaken the American public to the reality of the plight of the first Americans and to assert the need for Indian self-determination. As a result of the occupation, either directly or indirectly, the official government policy of termination of Indian tribes was ended and a policy of Indian self-determination became the official US government policy."

In a recent autobiography of Oakes, "A Journey to Freedom: Richard Oakes, Alcatraz, and the Red Power Movement" (2018, Yale University Press), author Kent Blansett follows Richard Oakes from ironworking in NYC to non- violent, charismatic and sincere leader of the San Francisco-based intertribal organization the Indians of All Tribes.

Blansett explained to Indian Country Media what drew him to write about this often overlooked leader of the Alcatraz takeover.

"Richard has that heroic spark," Blansett said, "someone I felt was very real... He struggled, but he persevered throughout his life and I think that was the story that appealed to me because it was so real."

Richard Oakes legacy: 'Alcatraz is not an island. It's an idea'.