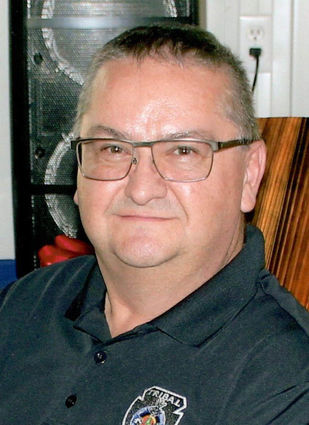 Marty was born June 19, 1960 in Malone, the son of the late Ivan P. and Marie L. (Stapleson) Jock. He attended Mohawk School and graduated from Salmon River High School in 1978. After graduation, he entered the U.S. Navy, proudly serving his country until his honorable discharge. While on active duty, Marty was a photographer who had many assignments such as portrait photography and aerial photography for map making and reconnaissance. His love of photography continued well after his discharge and became a lifelong passion.

After his discharge from the military he returned back to Akwesasne and worked in construction for a short time. He later started working for Akwesasne Mohawk Ambulance Service as an Advanced EMT and was a certified scuba diver. He continued to serve his community as a volunteer firefighter and police officer with the Saint Regis Mohawk Tribal Police and the Norwood Town Police Department until his retirement in August 2018. Marty was the very first School Resource Officer at Salmon River Central School. He was also a registered member of the Police Benevolent Association of the New York State Troopers.

Marty enjoyed racing stock cars, hunting, watching NASCAR, and UFC. He travelled extensively, enjoyed discovering different cultures and especially loved the ocean. He went to many rock concerts, but most of all, he cherished the time he was able to spend with his grandchildren. Marty also was a regular blood donor and even after death, he continued to give through the gift of tissue and organ donation.

He was first married to Cynthia Mitchell in 1979 and divorced after twenty years. Marty is survived by his wife, Barbara Buckshot-Jock; his daughters, Rachel and Bryan King of Akwesasne; and Amber and Gabriel Boswell of Denver, Colorado; his step-daughter, Tacala Buckshot and her companion Kasennakeron Stacey of Akwesasne; and his grandchildren, Ivan and Madison King, Santaye Buckshot-Lazore, and Santeea Stacey.

Marty is also survived by his sisters, Norma and Kathi Jock of Akwesasne, Heidi Jock of Cornwall, and Juanita and Donald Shanklin of Montana; his brothers, James Jock of Massena, Francis and Linda Jock of Bombay, and Jerome Jock of Texas; and many nieces and nephews. In addition to his parents, he was predeceased by a brother, Harvey in 1997 and nephew Mitchell in 2010.

Friends called on Tuesday at the Akwesasne Homemakers, where funeral services will be held on Thursday, December 6, at 11:00 AM. Burial will follow in the military section of St. Joseph's Cemetery, Akwesasne.

Memorial contributions may be made in his memory to the Akwesasne Mohawk Ambulance Service.