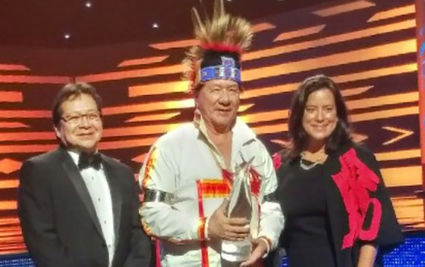 Former Grand Chief Michael Kanentakeron Mitchell received the 2016 Indspire Award (formerly known as the National Aboriginal Achievement Award) in Vancouver on February 12, 2016. Mitchell received the award for his long-time contribution for the advancement of recognition of rights of First Nations people and his political career, which spanned over 40 years. On his right is Canada's Justice Minister the Honorable Jodie Wilson-Raybould who co-presented the award to him. On his left is Don Worme, Indigenous Lawyer. Photo courtesy of Peter Garrow.

Tune in to APTN or Global TV at 7:30 PM EDT on June 24th to experience an evening of culture and celebration as stories are told of fourteen outstanding Indigenous achievers! Former Grand Chief Michael Kanentakeron Mitchell received the 2016 Indsp...