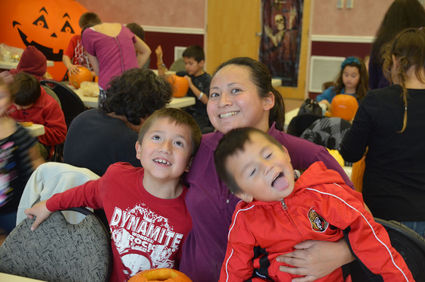 Chrissy Jacobs with sons Talon and Mikey. As you can see, Mikey is thrilled to be in the picture.

On Monday, families gathered at the St. Regis Recreation Hall to compete in a family pumpkin-carving contest. This was the fifth annual family pumpkin-carving contest. There were at least 19 families who participated, and even more arrived after I left. The parking lot was nearly full. Those attending were busy carving up their orange canvases to make something frightful and hopefully win one of three prizes. All three gift baskets were filled to the brim with family friendly activities like games and puzzles. 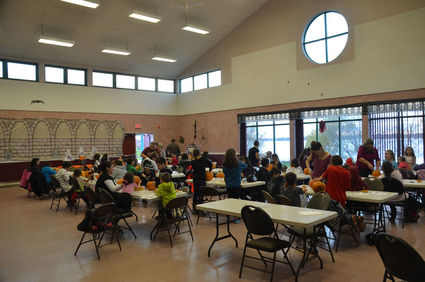 Families from the community come to spend time together and compete for prizes.

Before the carving carnage began, a healthy supper was served for everyone. Funds for the evening of family fun came from the National Child Benefit Fund. Mr. Bonesteel from Bonesteel’s Gardening Center in North Bangor, brought 75 pumpkins in a giant wagon, as well as treats, like candy apples, that were for sale.

Chrissy Jacobs, who has attended all of the pumpkin carving contests, first with her son Talon and now with her youngest Mikey as well said, “I think this is awesome, every year they get more organized.”

This is but one of the many events they have planned for the family. The next one coming is a trip to pumpkin inferno, which right now is scheduled for November 1st. If you want to go to the pumpkin inferno and you want to go for free, this is the way to do it. For more information check the St. Regis Rec’s facebook page.