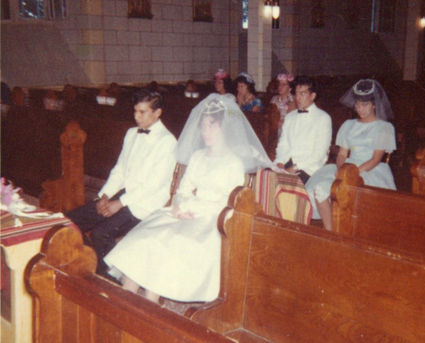 Roy and Jollene on their wedding day.

Recently, Joellene and Roy Adams celebrated their golden wedding anniversary. September 15th 2012 marks 50 years of wedded bliss for the Adams’. Joellene said, “we didn’t meet, we lived next to each other. I kinda grew up along with his sisters. Went away to work in Syracuse for a few months and when he came back around we had a date and that’s how it all started.” Roy and Joellene also share their birthday month, so they have a lot in common.

The Adams moved to Boston as soon as they were married, as Roy was an ironworker for 42 years. As it turns out they lived near and did laundry at a Laundromat where one of the Boston Strangler’s victims was found, so that prompted them to return to Akwesasne. As soon as they got home they started to work on a house, and Joellene got a job to help save for the house.

Their daughter Della, now the “only child” as she puts it, told me that they have endured a lot of things over the last few years, chief amongst those things was loosing both of their sons. Still though, Della says, “They have the healthiest relationship I have ever been exposed to. They are very much in love with each other and there was always Mohawk, I was brought up with the language.”

The Adams’ struggled but always persevered, and have both been hardworking, even as their health has become worse, they still try and work. Della didn’t understand when she was younger, but sees now that they had a balance that has endured with them through the years. One thing is that Roy always took care of the outside of the house, and Joellene always took care of the inside.

Being the oldest of their respective families, they had a lot of stresses from that as well, but again they endured, and provided for their family, sometimes taking care of family who needed to stay with them. Something else worth noting about the Adams’ is that both are very loyal, and together they formed lifelong friendships. Of the friendships they have made over the years, some were around when they got married, some for their 25th anniversary, and now still for their 50th anniversary.

Many others and I have asked what is the secret to their happy union and she said, “There’s no big secret to having a relationship, there’s no question about the relationship when you love someone.” Joellene added some wonderful advice though, “it’s a lot of give and take, compromises. And you always heard the saying you have to give 50/50, well in marriage its not like that. Sometimes it’s: I get 20% and he gets 80%, and sometimes he gives 80% and I give 20%. Sometimes you have to bite your tongue, and I used to ask myself What’s more important, him being here or what I am upset about? 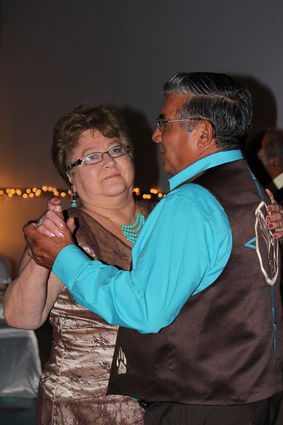 Joellene said, “I do want to add to that story how thankful we are for everybody that showed up and shared our special day. And to thank all the women that did the meal, most were my cousins that did the meal, it was a beautiful meal. The hall the way it was decorated was just fantastic, Cooks Greenery for the centerpieces, and father Jerome for doing the ceremony and understanding how important for us to do it at our son’s house. Also to thank the pastor for mentioning our children’s spirits who passed at the ceremony. Richard and Tracy. And a big thank you to my daughter, my sister and my nieces.”

It is wonderful to see members of our community who have succeeded in raising a family and have gone on to have a happy and loving partnership. Congratulations Roy and Joellene!