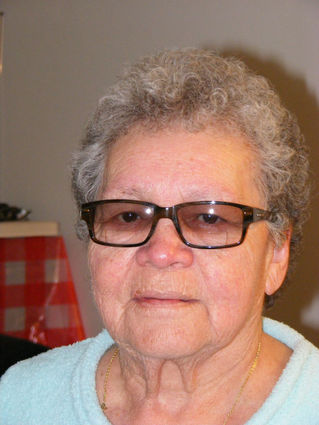 There is a young lady, Beatrice Lazore, soon to be 80 years old on March 13th.  She was born on St. Regis Island in 1932 and this week will share some stories from her life on the Island before moving to the village of Kanatakon.

“Don’t believe that “13” is an unlucky number,” said Beatrice, referring to her birthday. She shared many stories about her childhood and growing up on the Island and the differences she saw when her family moved to the mainland.  All her stories were so interesting and informative. Time just took us away as we visited. Beatrice enjoys people and would like to share more discussions and opens her home to others who would like to visit her to just talk and share each others history. Beatrice has experienced a lot in her lifetime and is a wealth of information. Give her a call if you wish, at her home in Kanatakon, 613-575-2001.

She started out that evening by talking about her third grade class, being age 9 and her life on the Island. “I even still have my books from then”, she began. “I wouldn’t want to show them to anyone because they have much scribbling in them.  What I remember most about these books is the cursive writing we learned with these books.  The booklets showed all the practice we did as we learned to write. We did a lot of practice! I could also read what I had written in one of my books.... Mary Ella is a bad girl,” said Bea as she laughed. “Another part of the book showed the tests we had to take in English learning. That was foreign language to us you see? We had to practice our reading and this test was very important. Struggling with getting a grasp on this new language, I devised my own method of phonics to write the words as they sounded to me.  Those books were Corona Catholic Readers and after doing my phonics, I felt as though I was cheating. Someone told me it’s only because I wanted and knew how to get things done”, said Beatrice.

She continued to talk about her life and at the completion of grade three, Beatrice and her family packed up all their belongings into a sled and crossed the St. Lawrence River. Their horse drawn sled had everything on it.  “When we came off the Island, some of the ice had already melted along the shore. I was so afraid we would go through!  As we were coming to the edge of the river I remember my father giving the horses a big ‘whack’ and they jumped right over the holes in the ice. As we approached the shores of the river, the shores surrounding the village there were also melted,” remembers Beatrice so clearly.  “The horses brought us safely to the land”.

So many changes have occurred over time.  The most recent observance during this month of February is that the river hasn’t even frozen yet. She recalled one Christmas midnight mass when her father brought them across in a row boat to church and they walked home the same week. Beatrice and her family stayed at a brother’s home until they could return home. Speaking about changes, the Seaway Project caused many things to happen.  Ice eruptions used to occur at any time of the day and the sounds it made along with it were all scary. The ice eruptions usually happened after a long spell of below zero, freezing weather.  After some logical reasoning and thinking back to those days, Beatrice remembers how they traveled.  At one point at St. Regis Island, a huge boulder was visible.  When the family had to cross the river, her father would always fill up his pipe for the journey across.  He would have to row very fast between the Island and the huge boulder. It seemed as if the swift current would carry the boat to an exact area on the shores at St. Regis.  If her father didn’t go through that path, then the current would carry the boat to a different location.  People learned and got to know how to use the river as well as the land.  Her observations caused her to guess that possibly those boulders and St. Regis and Yellow Island might have been joined in the past.  Thousands of years of erosion and swift waters have presented separate lands and some shallow water. Near the huge boulder is where the eruptions would occur.  This would cause loud noises and earth movement.

There happened to be another event involving the ice near the Island.  There were two young men riding in their car across the ice. Unknowing that there was an opening; the car went through and sadly, one of the occupants drowned in the icy water. The car was never recovered.  A sled was found while some children, including Beatrice, were playing. There was a nice hill covered by snow and the children were sliding and having a lot of fun on this beautiful night. All of a sudden an elder resident of the Island hollered out to the children, “don’t you kids know that the sled you have was used to transport the body of the man that drowned not too long ago?” “Boy, that ruined our fun so fast”, said Beatrice.

She also shared that she had such happy recollections about time with her grandmother at the Island.  She remembered that she had a crib that had metal bars like the ones in the hospital. Bea remembers running away from her parents’ home and she went to her grandmother’s. She was so nice to her and will always remember those good times.  Beatrice remembers one of the best Christmases when she received a gift from her teacher. “It was a Jack in the Box, I turned and turned until that clown jumped out...it was a gift I enjoyed so much.” Bea said. Another happy memory is also from her teacher giving her an empty chalk box. She was so happy as she took that box home. Bea took the cover off and kept the main part, the wooden box.  She began to play at an area of the Island that had a gravel pit. While there, she pretended she lived in that box. What an imagination and enjoyment of the pretend home.

On the St Regis Island there were various kinds of people and they were tolerant of each other’s flaws. “I never heard anyone argue or fight and that was the practice, it was understood that you accept each other. On the Island, if someone got sick or disabled, neighbors would come and give a hand to chores, fetch water, gather wood, and fix meals.  You know, we have lost that caring for each other. I noticed it wasn’t like that at all when we moved to the mainland in the village.  I was so shocked when I saw my mother ask a young man to get her some water and after he did, he wanted to be paid. I had never seen that before in my life,” said Bea.  That was the first inkling she had as to the differences in people in the village and from the Island where she had grown up.

Beatrice then began to attend school in the village. Her teachers were Mrs. Billings and Ms. McDonald in two classrooms.  Every time students were late for school Ms. Billings would slap their hands with a ruler. Some of the days the kids would go home for lunch. Beatrice went home to eat and returned to school a bit late. Well, she knew she had to get her punishment so she joined the line.  When it came to be her turn, the teacher excused her. “ She probably saw my terrified look!” said Beatrice smiling.  Another very unhappy time at school was when a bunch of girls wanted to beat her up. Her brother faced the same treatment.  This was worst than just being bullied at that time, it was physical.

She would wonder what made these individuals so mean and uncaring.  It must have been the loss of empathy, was it because they had more money?  She couldn’t figure it out and it puzzled her as to why kids turned out that way.  Beatrice had hopes that to mention this, would raise the need to revive empathy back into people that is obviously lost in so many.

The Sisters of St. Ann began to teach at the Kanatakon School when Beatrice was older. She felt that they had made such an improvement in the teaching. As in many cases, change is hard and many students were so mean to these teachers. Some kids tried to hurt the nuns even as far as kick them in the shins. It was awful!  Beatrice witnessed a boy hit one of the nuns in her upper stomach so hard that it broke the rope that held her cross. She loved her teacher so much; her name was Sister Dorothy Marie.  The nuns were teaching the students to prepare for the Ontario Provincial tests.  It was only on completion and passing of these tests that one would go on to high school in Cornwall.  Beatrice would be forever grateful to the Sisters of St. Ann for educating the students here.  They really encouraged the grammar and writing and seemed to concentrate on this area the most.  Beatrice and her sisters went on to boarding schools such as St. Andrews and Valleyfield. She remembers being the only Native student in her class and didn’t speak English too well. Her strength was in grammar and she could answer more questions about that area more than the other students. Determination and perseverance got her through school with the help of prayers. She did well but she was so shy, not wanting to answer questions.

Later on, Beatrice had the opportunity to help a Master student who was doing a project about Mohawk language. The student was able to spend some time with Bea now and then until the project was complete. Together, they devised and published a Mohawk Dictionary. An original copy was given to Beatrice and she was so grateful for it. To her and to others who may have paved the way for learning the written and spoken Mohawk language, we thank you.

Beatrice is a very nice person and would appreciate people going to visit her, she can share so much. She enjoys being a homemaker and her home.  She thanks the Lord for the gift she has on how well she relates to people. She continues to learn and researches information that she doesn’t know.

I have really enjoyed getting to know this woman and listening to her stories of the Island. I’m sure all of you will too.