The Story of The Great Bear, The Big Dipper 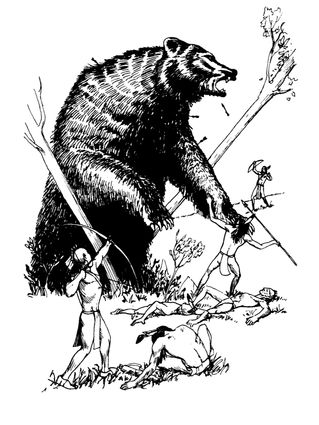 From Legends of the Iroquois by Tehanetorens (Ray Fadden)

This is a story that old Iroquois told to their children during the winter moons (months).

Many winters in the past, there was a Mohawk village of bark houses along the Oswego River.

One day Mohawk hunters discovered the tracks of a giant bear.

After that they saw the tracks many times. Sometimes the tracks would circle the Indian village.

The game began to disappear from the forests, and the Mohawks knew that the giant bear was killing and carrying off all of the game.

Because of scarcity of game, famine came to the Mohawks. The meat racks were empty. The people were hungry. Starvation faced them.

The head chief said, “We must kill this giant bear who is causing all of our trouble.”

At once a party of warriors set out in search of the bear. They soon came upon his tracks in the snow. They followed the bear tracks for many days .

They finally came upon the huge beast.

At once the air was filled with the arrows of the warriors.

To the surprise and dismay of the Mohawks, the arrows failed to pierce the thick hide of the bear. Many broken arrows fell from his tough skin.

At last the angry bear turned and charged the hunters, who fled but were soon overtaken. Most of them were killed.

Only two hunters escaped, and they returned to the village to tell the sad tale.

The two hunters told the council of the Great Bear. They told what had happened to the war-party.

Party after party of warriors set out to destroy the Great Bear, but always they failed. There were many battles fought between the bear and the warriors.

Many warriors were slain.

As time went on, more and more deer vanished from the forest. The smoking racks were empty.

The people became very thin because of the lack of food. Starvation caused many to become sick.

The people were filled with fear, and their hungry bodies crept close to the fire at night.

They feared the Great Bear, whose giant tracks circled their town each night.

They feared to leave their village because they could hear, coming from the darkness of the forest, the loud cough of the Great Bear.

One night three brothers each had a strange dream. On three successive nights they had the same vision.

They dreamed that they had tracked and killed the Great Bear.

They said, ‘’The dream must be true.”

So getting their weapons and a scanty supply of food, they set out after the bear. In a little while they came upon the tracks of the great beast. Quickly they followed the trail, their arrows ready.

For many moons they followed the tracks of the bear across the earth.

The tracks led them to the end of the world. Looking ahead, they saw the giant beast leap from the earth into the heavens. The three hunters soon came to the jumping-off place.

Without hesitation the three of them followed the bear into the sky. There in the heavens you can see them chasing the bear during the long winter nights.

In the fall of the year when the bear gets ready to sleep for the winter, the three hunters get near enough to shoot their arrows into his body.

His dripping blood, caused by the wounds from the arrows, turn the autumn leaves red and yellow. But he always manages to escape from the hunters. For a time, after being wounded, he is invisible. Afterwards he reappears.

When the Iroquois see the Big Dipper in the sky, they say, “See, the three hunters are still chasing the Great Bear.”