Water, water, everywhere but not a drop to drink 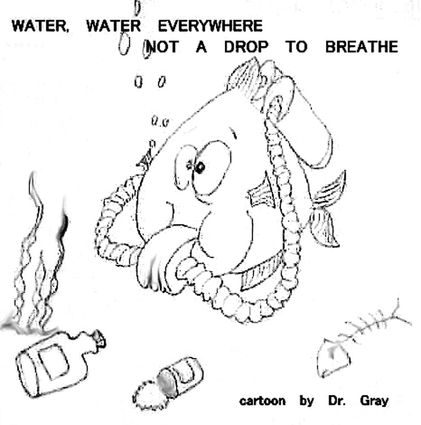 The rhyme of the ancient mariner - “Water, water, everywhere but not a drop to drink,” refers to the men aboard a ship on a long journey. They are far out to sea, and eventually they run out of water. Even though they are surrounded by water, they haven’t a drop to drink. If something isn’t done about pollution, we here on Earth (land) could be faced with the same dilemma.

Eighty percent of the earth’s surface is water, and ninety-seven percent of that is sea water. The Earth’s oceans cover approximately 140,500,000 square miles containing 330,000,000 cubic miles of water. There is the same amount of water on Earth today as there was when the Earth was formed. The water is the same water that existed billions of years ago. There is no more, and there is no less. The Earth’s water is continually recycled in its various forms as water, vapor, snow, rain, and ice. Plants recycle water. A fully grown oak tree transpires about 100 gallons of water a day, and an acre of corn can transpire 3,000 to 4,000 gallons of water each day. Transpiration is the process of water being taken into plants from moisture in the soil and then evaporating from the plants. It evaporates through pores in the plants leaves that are called stomata.

The water we drank today could contain molecules that Neanderthals drank. The water we use today is the same water that dinosaurs used. Two percent of the Earth’s water supply is in the form of ice caps and glaciers. In a 100 year period a water molecule spends 98 years in the ocean, 20 months as ice, about two weeks in lakes and rivers and less than a week in the atmosphere. One percent of the Earth’s water is available for drinking. People can live about a month without food, but only about a week without water. If we do not drink enough water, we will dehydrate which would lead to death.

Water conservation is important in many ways. Conserving water can extend the life of your septic fields because it reduces soil saturation. It reduces pollution to nearby lakes, rivers, and local watersheds. Overloading sewer systems can also cause untreated sewage to flow into our rivers. The smaller the amount of water that flows through our sewer systems, the lower the likelihood of pollution. There are many things you can do.  (1) Check your house for water leaks. (2) Check your toilets for leaks. Put some food coloring in your toilet tank. If the color begins to show in the bowl within 30 minutes, you have a leak. (3) Put plastic bottles or bricks in your toilet tank. You put some pebbles into the plastic bottles and fill with water then screw on the caps. This will weigh them down. You can also buy a tank bank or float booster. The use of these items can save ten or more gallons of water per day. Today you can also buy low flush toilets. (4) Do not use your toilet as a wastebasket or ashtray. Every time you flush a facial tissue or cigarette butt you are wasting five to seven gallons of water. (5) Insulate your water pipes with split foam pipe insulation. You will get hot water faster and avoid waste waiting for hot water. (6) Install water-saving shower heads. There are converters you can buy and install for your present shower head. (7) Take shorter showers. (8) When you brush your teeth, turn off the water after you wet your brush. Fill a glass for mouth rinsing. (9) Rinse razors in the sink that has been filled with a few inches of water. (10) When you wash clothes or dishes in washers, only do full loads. Also, when washing clothes avoid using the permanent press cycle as it adds five gallons of water for the extra rinse. Consider buying a frontload washer. They save water. (11) Use your garbage disposal as little as possible. Start a compost pile. (12) When hand washing dishes don’t leave the water running. (13) When cleaning vegetables, do not leave the water running. (14) Keep bottles of water in the fridge rather than letting the tap run to get cold water.

Today, acid rain is of great concern to all of us. It is very harmful to the environment. Over time, if we do not control the production of acid rain, all living things in the environment will die.  Acid rain affects life in the water and the life on land. It is very bad in the water because the things that live in the water need the water to breathe. Acidity is measured by pH, which stands for potential of oxygen. The pH is measured on a scale from 0-14 with 7 being neutral. All rainwater has some acidity. Normal rainwater has a pH of 5.6. When the pH of rainwater goes below that number, it is considered acid rain. All sea life will die if the water they live in becomes too acidic going below 4.5. Most frogs and insects will also die. When the water becomes a pH of 5.5 all bottom dweller animals that eat the remains of food other animals do not eat, will die. Their death will leave un-decomposed foods on the bottom of the water that will cause pollution that will kill all the fish. If acid rain becomes a bigger problem, all sea life will end.

Acid rains also affect our air and our health. Breathing and lung problems in children and adults have been linked to acid air pollution. Everything we breathe, drink, and eat comes in contact with acid deposits.  Acid rain also damages non-living things such as statues, sculptures, buildings, and building materials. There are many things we can do to help stop pollution. Most pollutants it is said are caused from automobiles. Automobiles release harmful smoke into the air. This smoke causes acid rain. Coal, oil, and gasoline are the most common causes of pollutants. If people reduce the amounts of these things, then there will be less pollutants.

One major way to help is to reduce the amount of trips that are taken in the car. Another way we can all help is to reduce our use of electricity. When we use electricity, fuels are usually burned. The fuels burned cause pollution, which causes acid rain. The generation of electric power produces more pollution that any of the other industries in the United States. Burning fossil fuels and coal causes pollution. Many places around the world are monitoring acid rain. In 1998 data showed that using electricity and the pollution that comes from it was responsible for 67% of the sulphur dioxide emissions. These emissions were responsible for much of the acid rain that year. Every time you turn on a light, it causes pollution that causes acid rain. You may not realize it but doing little things in your home can cause pollution. To cut down on this pollution follow some of the same rules above for washing machines and dishwashers. Also, when you can, line dry. Turn off lights in an empty room. If you are going to go away for a long period of time, turn off your water heater. Turn down the heat at night and when you are not home. Try to reduce, reuse, and recycle as often as you can.