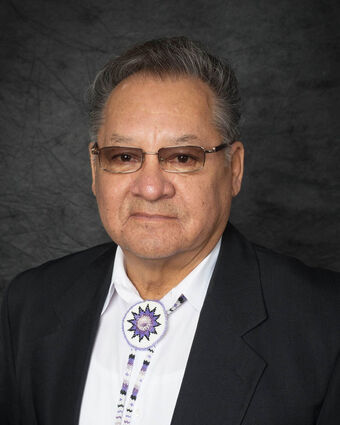 Paul was born in the Ahnawate (Raquette Point) area of Akwesasne on July 19, 1944, the son of the late James Jr. and Elsie (Paul) Thompson. He first attended schools on the reservation before graduating from Salmon River Central School. On June 21, 1970, he married Hilda Catherine Thompson in Hogansburg. They recently enjoyed the joys of their 51st wedding anniversary. Hilda really loved her husband Paul.

Paul was an ironworker with Local 440 for many years. Paul also supported his community as an elected Tribal Chief for three consecutive terms from 1996-2003 and was re-elected in 2012 for a fourth impressive term expiring in 2015. He was a proud supporter of Onkwehonwe Rights and the Traditions of the longhouse. He always enjoyed good conversation about politics, visits to the casino, a good round of golf, and watching football. Paul proudly maintained his property with well-manicured lawns and beautiful gardens. He enjoyed watching his grandkids and they were the joy of his life.

He is also survived by his siblings, Harry, Loran, Marilyn, Larry, and Dulsie; and many nieces, nephews, cousins, friends and colleagues throughout the community.

In addition to his parents, he was predeceased by his siblings, Leslie, Clifford, and James Thompson.

Friends called at Kanienkehaha Kanonsesne Longhouse for a WALK-THRU visitation on Monday, November 8th starting at 12:00 PM until 9:30 AM on Tuesday. Due to COVID occupancy restrictions, his funeral ceremony will be held privately. Face coverings are required for all in attendance.

Funeral arrangements are under the care and guidance of the Donaldson Funeral Home, Massena, where friends are encouraged to share memories and offer condolences online at http://www.donaldsonfh.com.