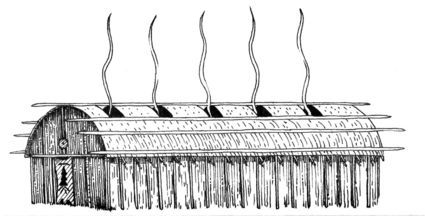 Longhouses are long and narrow bark covered houses that the Rotinonshonni (People of the Longhouse), also known as the Iroquois, lived in until the latter part of the l800's. These homes contained one large extended family. All the women and children living in a longhouse were of the same clan. Longhouses had two doors and no windows. One door was located on each end of the longhouse. Numerous longhouses in an area created a village. The village was sometimes protected from intruders by a palisade (an 18 ft. tall wooden fence). The Rotinonshonni planted gardens around their homes. They planted foods like corn, beans, and squash. They also hunted game and birds; they ﬁshed; and they gathered wild plants, berries, seeds, and nuts.

The longhouse is constructed using a wooden pole framework. Long poles are vertically set into the ground with the Y fork at the top. These long poles are set to form a large rectangle that is spaced approximately 4 to 5 feet apart and stands 10 feet tall.

The roof is created by bending and tying into place young sapling elm tree poles. To make the roof framework stronger, horizontal crossbeams are tied into place. The roof is between 5 to 10 feet tall making the overall height of the longhouse about 15 to 20 feet tall. The roof is angled (slanted) to assure that rain and heavy snows will not accumulate and damage the roof. Once the framework is created, the Rotinonshonni use elm or black ash bark "shingles" to cover the outside of the longhouse. After the elm or black ash trees are felled, the bark is carefully removed in sheets that are a few feet in height and about 6 feet wide. The bark is laid out and ﬂattened.

This outer framework made the structure stronger and further secured the elm bark into place.

The same technique is used to cover the roof. However, when covering the roof, a smoke hole directly over every ﬁre pit within the longhouse is left open.

DIMENSIONS AND WHO LIVED INSIDE THE LONGHOUSE:

A longhouse is approximately 15 to 20 feet in height, 20 feet wide, including the door opening, and could be anywhere from 40 feet to 200 feet long. The length of each longhouse depended on how many daughters the elder mother of the clan who lived in the longhouse had. A longhouse might start out short, but could easily be made longer to accommodate her married daughter's husband and their children.

The Rotinonshonni are matrilineal, which means that the clan that one belongs to is passed on from mothers to their children. One is not allowed to marry a person in the same clan. When a daughter married her husband, who had a different clan than his wife, he would come to live in the longhouse of her mother. When this couple had children, the children would have the clan of the mother. A husband did not lose his clan and become the clan of the wife, rather he lived with his wife in the house of her mother and retained his mother's clan.

The inside dimensions of the longhouse were very interesting. The elder mother and her husband and each of the daughter's families had their own living area within the longhouse.

The living area consisted of storage spaces under a platform that was a foot off the ground, approximately 13 feet long, and 6 feet wide that formed the bed and sitting area, and an upper common platform that ran the length of the longhouse could be used to sleep on or for storage.

The lower platform was set a foot off the ground to protect the people from the dampness of the ﬂoor. Mats made from cornhusk, or other woven plant ﬁbers were laid on the platforms to sleep on. Hides and furs were also used to lay on, and were used to keep the people warm. The upper platform was used for sleeping and storage. Items like braided corn and medicine plants could be hung from the rafters until needed. Dishes made from bark or hand carved bowls and spoons were stored in their living areas. Also, bows and arrows, blowguns and other tools and ceremonial items could be hung from the rafters or stored on the upper platform.

Within the storage area, the Rotinonshonni used elm bark containers to store food items like dried corn, beans, and squash (also known as the Three Sisters).

The elm bark containers helped to keep the dried food items from getting moldy and ruined. Wood for the ﬁre pits was stored in this area too. Dried meats were also kept in bark containers and hung in the rafters.

Also, if a family had many children, sometimes they would build a sleeping platform in the storage area for a child.

The doors, entrances, and the area around the ﬁre were common areas (used by all people within the longhouse). The ﬁre pits were used by the families on each side of the ﬁre to cook and as a source of light and heat.

Above the door of each longhouse was carved or painted the symbol that represented the clan of the people who lived inside. When visitors came to the village, they would know right away what clan lived in a longhouse. For example, if there was a turtle painted above the doorway, it would mean people of the Turtle Clan lived in that particular longhouse. This was and is important because all people of the same clan are considered to be "related", to be "family". If a traveler from another village came to this village, he would be welcomed by the people of the Clan he shares, he would be offered food, and a place to rest. The clan system if very important because it helps to keep people unified and maintains peace.

THE LONG HOUSE AND SYMBOLISM

Today when you see a picture drawn of a longhouse, the artist usually draws the longhouse with 5 smoke holes in the roof. The artist does this to symbolically represent the founding of the Rotinonshonni (or Iroquois) Confederacy, which originally included Five Nations. The Five Nations are as follows: The Mohawk, Oneida, Onondaga, Cayuga, and Seneca. These Five Nations accepted the Great Laws of Peace from the Peacemaker and joined together in peace, like one longhouse. Actually the Peacemaker, in approximately 1140 AD, told the Five Nations that he envisioned the coming together of the Five Nations, in peace, as one longhouse. In Approximately 1714, the Tuscarora Nation joined the Rotinonshonni and made the confederacy Six Nations strong.