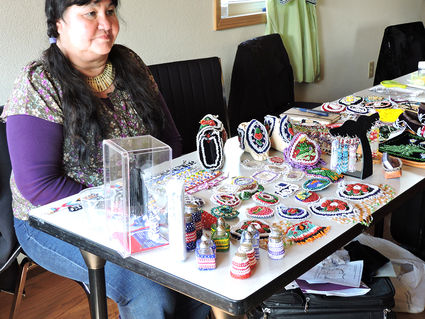 On September 19th-September 21st, the 2014 International Iroquois Beadwork Conference was held at the Six Nations Polytechnic in Ohsweken, Ontario. The event was organized by Delores Elliott who is a collector and researcher of Haudenosaunee beadwork and has authored 8 books on the subject. Artists from all Six Nations Territories, from the Eastern Door to the Western Door and beyond, shared their beautiful work.

For thousands of years, beads have been used to mark a time in our history, as demonstrated by the purple and white beads that were carved from quahog shells and placed purposely, with each bead sharing a message within a Wampum belt and on a string of Wampum. And, how many of us can remember hearing Ray Fadden reciting the legends that were contained within the beaded "story books" as he pointed out each symbol as we learned the lessons he shared in the Iroquois Museum in Onchiota?

The Haudenosaunee (Hotinonhshonni), have many identifiable symbols that are used to adorn traditional clothing, barrettes, necklaces, pouches, and more. Each artist who creates a piece of beadwork does so with a purpose and with pride. This was demonstrated in a fashion show that was held on the second day of the conference.

To listen to the artists share their stories would make anyone appreciate their work at a higher level. For many, beading was as much a way of life as raising a family. Grant Jonathan, from the Tuscarora Nation stated, "Family ties keep the beadwork going. It's sharing and creating." She teaches beadwork today.

One woman, Carla Hemlock of Kahnawake, spoke of how she was raised in a family who did beadwork for a living. When she was a young girl, it was her job to run from house to house and yell through the windows that "the bead lady is coming." In those days, around 40 years ago, bead peddlers used to come to the community two times a year to sell beads. Many times, you didn't have a choice about what colors of beads you would use in your work; it depended on what the peddlers had when they came to the community.

Not all families did beadwork, but there were family patterns that were recognizable. Carla's family made picture frames. Her family would collect cardboard and when they had a large stack, they took it to her great aunt's house. Her great uncle cut the cardboard into frames, her great aunt covered the cardboard with velvet and then the frames would come back to her family where they would be finished with beadwork. They sold the picture frames and other people in the community sold their beadwork, and although this was all taking place during the Great Depression, they didn't know what that was because selling their beadwork kept them going.

It was sad though, to know that antique dealers started to come into the community and scour away their artwork. There are still some very special pieces of work found with families. Some of the oldest pieces of artwork was made with porcupine quills and dyed moose hair. This was used before modern day beads were introduced. 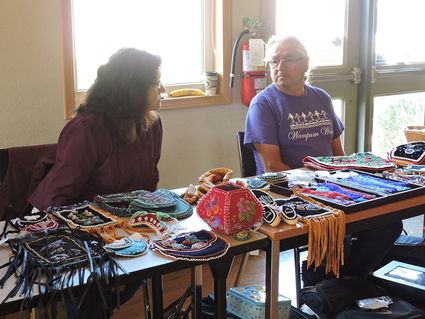 Works of Robin and Laura Manthe. Photos submitted by Arisawe.

All artists have a story of how they began and their art, in turn, tells a story of the artist. Their art can "give a voice" to the Haudenosaunee and as I look at the art, pride is what is spoken.