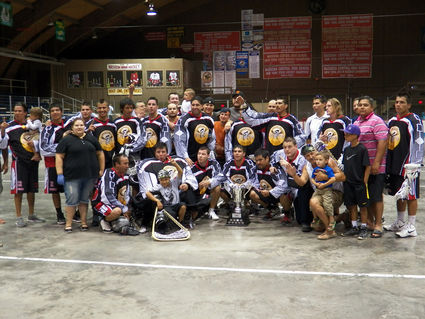 The Caughnawaga Indians pose with the Iroquois Lacrosse Association’s top honor on Thursday, Aug. 15 at Massena Arena after taking down the Snake Island Muskies four games to one. They will advance to the President’s Cup in Kahnawake next week.

The Caughnawaga Indians took the Iroquois Lacrosse Association’s top honor for the 2013 season on Thursday, Aug. 15, defeating the Snake Island Muskies 8 – 6 in game five of a best-of-seven series at Massena Arena. They will advance to the Pre...