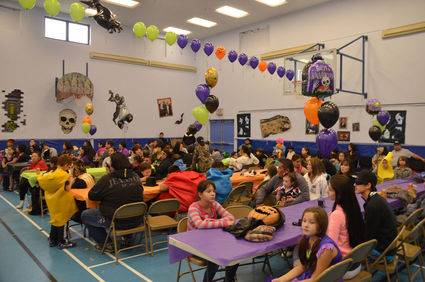 On Saturday, the Snye Recreation Hall held its annual Halloween Party. The gym at the rec. was full of families with their costumed ghoulies. On the way in, tickets were given for door prizes. Sweets, snacks and other refreshments were for sale.

Ahead of the costume contest there was a contest to pick the new faces for SRMT Environment’s Spokes-characters, Tiio and Kwis. In the role of Kwis, Dallas Caldwell was selected in the 18 and over category. Nolan Jacobs was picked as the new Tiio. A year’s supply of blue bags, from the solid waste program, was awarded to the winners. Both Caldwell and Jacobs received an appearance contract with five guaranteed appearances, the first being at the National Recycling Day event, which will be held at the transfer station on Drum Street, on November 15th.

In the 17 and under category, Dallas Caldwell Jr. was picked as Kwis, and Bostin Caldwell was picked for the best Tiio. Both young men won a kindle as their prize.

I think most were there for the children’s costume contest.

The costumed children were split into differing age groups, starting with a year and under, 2 year olds, 3 years and so on. As the kids got older the ages grouped together got bigger. The children needed to get their number, and their parents showed them off for the judges to make their picks. As the age groups got older, the kids held their own numbers. They paraded around and all the parents were snapping pictures. The standouts I can recall were Mario with a thick black beard, and Michael Jackson. The kids seemed to love the parade, with only a few being camera shy, or really upset.

After the costume contest, there was a hayride for about an hour, with a dinner that followed. After dinner games were setup and the kids that were still there had a good time, which wrapped up around 7.

If you didn’t have a chance to make it this year, definitely plan to bring your kids to next year’s Halloween party. 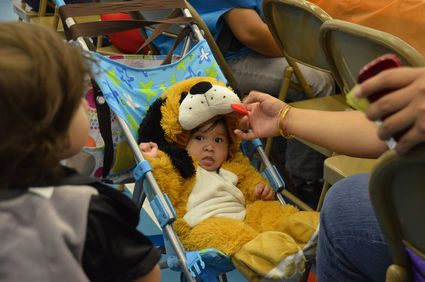