The Canonization of Kateri Tekakwitha 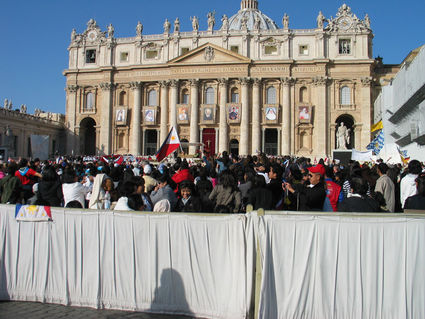 The pictures represent the seven that were achieving sainthood at the Vatican. Along with Kateri Tekakwitha there was Father Jacques Berthieu, France, Jesuit missionary killed in Madagascar in 1896; Pedro Calungsod, Phillipines, died at the age of 17 in 1672 defending a Catholic priest; Father Giovanni Piamarta, Italy, founded Congregation of the Holy Family of Nazareth and a Catholic press, died in 1913; Sister Carmen Barangueras, Spain, founded 14 Houses of Mary the Immaculate, died in July 1911; Mother Marianne Cope, German-American, administrator to the leper colony in Hawaii, died in August of 1918; Anna Schaffer, Germany, author and advocate, died October, 1925. Photo by Joyce King.

The canonization of Kateri Tekakwitha took place over two days.  The first part was her official recognition along with six other candidates, including Mother Marianne Cope, a 19th century Franciscan nun who cared for leprosy patients in Hawaii,...