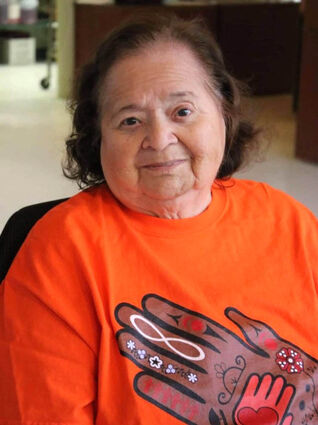 AKWESASNE – Sarah M. (Jackson) Mitchell, 89, of 1605 River Road, Tsi Snaihne, passed away early Thursday morning, July 21, 2022 under the loving care of the staff, who she also regarded as her children and grandchildren, at IAK HIH SOH THA Home for the Elderly.

Sarah was born at the family home in Hogansburg on November 23, 1932, the daughter of the late John L. and Anna (LaFrance) Jackson and attended Mohawk schools. On July 7, 1956, she married Theodore "Ted" Mitchell at St. Regis Catholic Church. He predeceased her on April 11, 2014.

Sarah worked for a time in Syracuse and at Bombay Slipper Factory. She also was a cook at Tsi Snaihne School, worked for Mohawk Council of Akwesasne as a home day care provider, and as a home support provider with the St. Regis Mohawk Tribe. Sarah was a loving mother and grandmother, who always had an open door for any person that came to her home – as she would say, "We are all family!" She was a lifelong communicant of St. Regis Catholic Church, a member of the Kateri Circle, Akwesasne Death Benefits, Tri-District Elders, and the St. Regis Mohawk Senior Citizens. She enjoyed playing radio bingo, sweetgrass braiding, playing cards, and will be fondly remembered for her cooking and baking.

She is also survived by her sisters, Marilyn and Mike Tarbell and Elizabeth Sunday; her brother, Mike Jackson; her sisters-in-law, Linda Jackson and Florine Morgan; many nieces, nephews, and cousins; and many children who she fostered throughout her life.

In lieu of flowers those wishing may consider memorial contributions to be made in her memory to IAKHIHSOHTHA Home for the Elderly Activities Fund.

Arrangements are under the care and guidance of the Donaldson Funeral Home, Massena, where memories may be shared online at http://www.donaldsonfh.com.