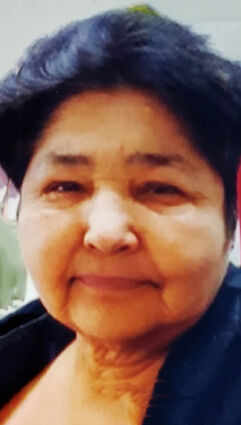 Winnifred David McComber "Kawisoronkwas" - wolf clan, 69 of Kahnawake, entering back into the Spirit World on her journey to the Creator on February 22, 2022 at the CHUM Hospital in Montreal, Quebec, surrounded by her loving family where she had been a patient since early Monday morning.

Winnie was born on March 19, 1952 on Kawehnoke, the daughter of the late Ross and Madeline Point David and attended schools on Kawehnoke and in Cornwall, Ontario and later went to George Brown College in Toronto.

Winnie married Stephen McComber on September 4, 1976 at the Mohawk Nation Longhouse in Akwesasne. She enjoyed making ribbon shirts and ribbon skirts for her grandchildren and great grandchildren and for other people that ordered from her, baby quilts, beading, basket making, playing bingo, playing cards, going to Casino. Winnie worked at Levi Strauss Company and as a PSW in Kahnawake until she had to retire. She was a clan mother and faith keeper for the Mohawk Trail Longhouse for many years.

She is survived by her husband Stephen McComber and their 2 children Karahkontieh(Theresa) and her daughter Kahontiiosta (Shakonwaré:tsi) and her grandchildren Justice, Ethan, Dade, Tehothahatenion, Rawennaienteres, Aiden, Daemian, Devlin, Ronan, Teiakoianakhen and Aibhlinn, her great grandchildren Alianna, Adrian, Oliver and Florence, her mother-in-law Irene, brothers-in-law and sisters-in-law.

Winnie is also survived by her siblings: Danny (Jennifer), Ernest (Sandra), Lorena, Leroy (Teres), Sherman (Jennifer), Dinah, Eugene, Brenda (Robert) of Akwesasne and 3 aunts, 3 uncles, many nieces, nephews, cousins and friends. She was predeceased by her parents and her brother Floyd "Wally" David and brother-in-law, Harry Nanticoke, and also by sister in law, Theresa Square.

The family received relatives and friends on Saturday February 26th at the Mohawk Trail Longhouse from 11 am to 2 pm. Followed by a ceremony then to the crematorium.