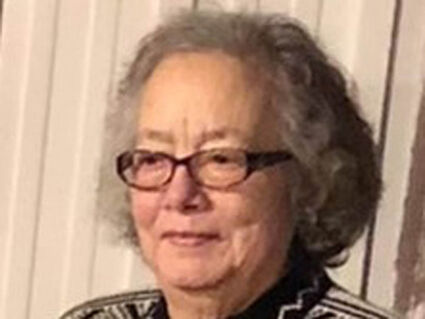 Angie was born on March 28, 1937 in Massena, the daughter of the late George and Clara (News) Garrow and was a graduate of Massena Central School. On July 16, 1955, she married John "Jerry" King at the Hogansburg United Methodist Church with Rev. William Masters, officiating. Jerry predeceased her on January 4, 2005.

Angie was a dedicated homemaker and mother raising her family. She also worked for a time at the St. Regis Band Office as the Welfare Administrator. While in the position, Angie was instrumental in instituting the educational training program for Akwesasne women, which started the personal support workers program within the territory. Angie also operated "Where the Partridge Drums" Tackle Shop at her home for many years. Additionally, she was a lifelong member of the Hogansburg United Methodist Church, where she dedicated many years as a trustee and supporter and member of many programs, including the United Methodist Women – she was truly the backbone of the church throughout her life.

In addition to her parents and her husband, she was predeceased by a son, Jerry Paul "Punchie" King on August 9, 1992; her brothers, Robert, Webster "Jr", William, Gordon, and Stanley Garrow, and her sisters, Olive Simpson and Rebecca Smith.

Friends may call at her home beginning at 6:00 PM on Thursday until 12:00 NOON Saturday. Due to Covid occupancy restrictions her funeral services will be held privately at the Hogansburg Methodist Church with Pastors Hattie Taylor and Mark Garrow, officiating. Burial will follow in the Hogansburg Methodist Cemetery. Face coverings are required for all in attendance at the home visitation.

Memorial contributions may be made in her memory to the Hogansburg United Methodist Church.