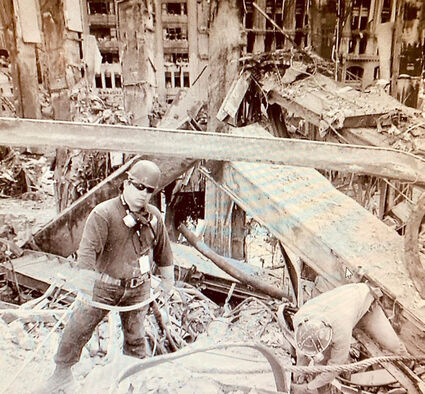 By Ana Williams-Bergen. Reprinted with permission from NCPR.

The terrorist attacks of Sept. 11, 2001 hit one North Country community particularly hard. Akwesasne Ironworkers have built New York City's skyscrapers for generations. They helped build the World Trade Center, they were working when the Twin Towers fell, and they raced immediately to the rescue and cleanup effort.

On that sunny Tuesday morning, Mohawk ironworker Roger Thomas was working on a high rise in Jersey City, 700 feet off the ground with a clear view of Manhattan. He watched as the plane hit the first Twin Tower, and says the second plane turned right near his building, almost at eye level. Thomas could see people stranded in the Towers' top stories as the buildings caught fire.

"The smoke and fire was coming up under them and they literally just jumped off. They had no choice, either that or burn up."

After the Towers collapsed, the call for help quickly spread through the ironworking community. Many of the first on the scene were volunteers. Paul and Peter Jacobs, brothers from Akwesasne, were working in the city. Peter says they worked the night shift at Ground Zero just after the attacks.

"It was eerie, quiet. And literally it was probably about six inches of dust; papers, debris, we were walking through."

The ironworkers' job was to clear a path so that rescuers could safely navigate through the wreckage. That meant doing what ironworkers do best: cutting, hooking, and moving steel beams. Paul Jacobs says the pile was so big that the work felt insurmountable. He compared the work to playing a game of pickup sticks: "you move one thing, something else would move."

Ironworker Michael Mitchell was hired to work at Ground Zero, and labored daily at the site well into November. He says he learned to compartmentalize in order to cope with the gruesome nature of the work.

"You have to sit back and say, okay, well that's beyond us. We're here with the task to do our skilled trade and work."

Mohawk ironworkers have a reputation for being tough as nails. They have to move heavy steel beams while balancing on girders hundreds of feet in the air. But even that couldn't prepare them for what they witnessed at Ground Zero. Paul Jacobs says that after the cleanup, most ironworkers avoided talking in detail about their experiences.

"There had to be people still alive when we were there but so far out of, out of reach that you can't actually help them."

Peter Jacobs says that memories of the Pile stuck with him afterward, but he eventually put them to rest.

But the health effects of working long hours breathing in toxic dust were impossible to avoid. In the beginning, most ironworkers didn't have respirators, and used makeshift face coverings or went without. Mitchell says that in the first months, no one was certain about the possible health effects.

"You look back and you were walking in two feet of asbestos."

After only one shift, Peter Jacobs went from running seven miles a day to being diagnosed with asthma and says he still suffers from respiratory issues 20 years later. He considers himself one of the lucky ones: he says a number of Akwesasne ironworkers who assisted with the cleanup have since passed away from cancer. Still, others are battling serious health issues. According to Vox, over a thousand first responders have died due to 9/11-related health conditions.

Sept. 11 was uniquely personal to Mohawk ironworkers. Mitchell's grandfather and uncles helped construct the Twin Towers. So when they fell, he didn't think twice about heading to Ground Zero to help.

Jim Rasenberger wrote about this intimate connection Mohawk ironworkers have with September 11th in his book, "High Steel." He says they started working on the New York City skyline around 1900, and generations of Mohawk families have been doing it ever since.

"When the towers went down, it wasn't just buildings collapsing. It was also a great deal of personal history that went down with those towers."

Paul Jacobs, Akwesasne Mohawk, says today, he's proud to say he did what he could to help.

Peter Jacobs was later invited to help construct the Freedom Tower, the main building of the reconstructed World Trade Center. He worked on the project for four years and says it was an honor for him to have the opportunity to give back. Jacobs says that as an ironworker, his job is to put things together, not take them apart.