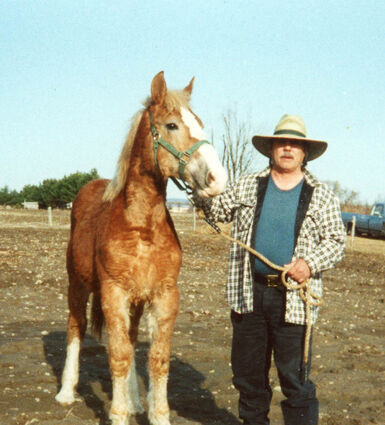 BRASHER FALLS- Stephen D. Ingle, 73, of Smith Road, Brasher Falls, passed away peacefully on Monday, July 5, 2021 at Canton-Potsdam Hospital with his family by his side.

Stephen was born on January 4, 1948 in Elmira, New York, son of the late Edwin D. and Catherine I. (Dailey) Ingle. He attended school in the Catskills until he drafted into the US Army in 1967 and served until his honorable discharge in 1970.

Stephen was a farmer and loved it. He also worked for the Town of Brasher Highway Department and TVI Casino. He especially loved raising, and working his draft horses. He enjoyed the outdoors and being in the woods, fishing, riding his four-wheeler and visiting with friends and family. Most of all, he treasured his time with his family and children.

Friends and family may call on Thursday July 8, from noon-6 PM at the Donaldson Funeral Home, Massena.

Memorial contributions in Stephen's memory may be made to the NYS Horse Pullers Association, 2884 SR 221 Marathon, NY 13803.

Arrangements made under the care and guidance of Donaldson Funeral Home, Massena, where memories and condolences may be shared with the family at http://www.donaldsonfh.com