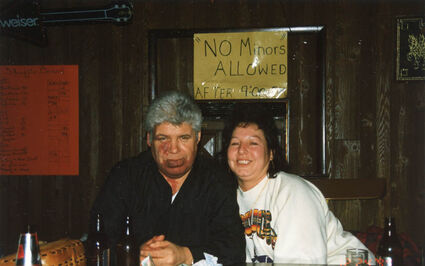 AKWESASNE-Peter "Pete" J. Martin, "Shakoroniahtahkhwa Rohskarewake Kwe," Sr., age 71, of 20 Martin Road, passed away on Tuesday, June 29, 2021 at the Ottawa General Hospital after a long-fought battle with his health.

He attended schools on Kawehno:ke and was a fluent Kanieńkehá speaker. In his younger years, Pete followed the fearless career path of his Mohawk ancestors and became a sky-walking Ironworker for Local 33 out of Rochester "the Rock," New York. He later became a successful entrepreneur, as proprietor of Pat and Pete's General Store and the infamous Water Hole. He always had a fresh Carhartt jacket, gloves, and of course cowboy boots. He was a dedicated family-man and patriarch to his children, ever-growing grandchildren and great-grandchildren. He looked forward to their birthdays to celebrate them, and especially Christmastime when his house was full with everyone, as he played the role of Santa Claus, with Mrs. Claus by his side.

Anyone who knew Pete would say that he was kind, thoughtful, loved unconditionally, and had a grand, highbrow sense of humor with a hearty laugh, and was a rule-breaker if the occasion called for it. His voice was rich, jovial, equally smooth and husky. He loved music, listening to the radio. He would say, "Let's go boogie," when you walked into his favorite spot in the house, the kitchen. Peter enjoyed starting his days with a Tim Horton's coffee sitting in his breakfast booth overlooking the St. Lawrence River and visiting with his family and friends who would know he'd be there and would "pop in" for coffee and good conversation. When it was time to say goodbye, he would always say, "Where we going? Chicago!" Pete loved horses, big trucks, road trips, and watching western movies. He was a football fan of the New England Patriots, and enjoyed waging small bets on them in jest. He enjoyed watching his Champions, "Da Patriots," he would say "They're going to win it." And he was right! Pete brought that same energy to family card nights and enjoyed a good game of Gin Rummy. Those who dared play opposite him, they would hear the cards slap on the table and his serious tone while he told you, "Gin," with a proud and mischievous grin, unless he "let you win." He also enjoyed his weekly CKON Radio Bingo on Tuesday nights. Pete sure knew how to have a good time and was the epitome of an Akwesasne gentleman and will always be remembered as a class act. Pete loved his family above all else and would move the sun and moon for them if he could.

He is predeceased by his parents, Anne Marie and Richard; his wife Patricia (Smith) Martin on March 28, 1994; his sister Marion Curtis of Rochester; his brother Louis P. (Roberta) Martin of Akwesasne; his eldest son Richard Jacob Martin; his sister-in-law Carol Martin; his brother-in-law Tommy Lazore; and his nephews Rodney "Tom" Pierce, and Timmy Benedict.

Family and friends called on Monday, July 5, 2021 starting at 2:00p.m. until time of services on Tuesday, July 6, 2021 at 3:00 p.m. at his home at 20 Martin Road, Akwesasne, ON. Burial will take place in the Martin Family Cemetery located on Martin Road, adjacent to his home.

To send flowers to the family, plant a tree in memory, offer a message of condolence, or share a memory of Peter J. Martin, Sr., please visit his obituary at http://www.donaldsonfh.com.

Arrangements are under the care and guidance of the Donaldson Funeral Home, Massena.