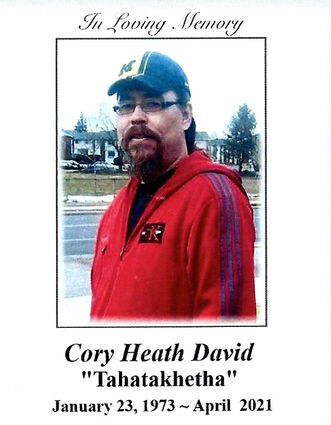 In loving memory of Cory Heath David "Tehatakkhetha" passed away at the age of 48 at his home on April 2021 He was born on January 23rd, 1973. He was the beloved son of Donna VanDusen and the late Floyd "Wally" David. Cory is survived by his children Justin Martineau, Joshua (Hannah) David and Mira David. He was dearly loved by his brothers Brooke (Terri), Quinton Gibson (Betsy), Wallace (Tamara), and his sisters Angee Bassett (Kevin), Ashley and a stepsister Natalie Hamza (Mohammed). Cory is survived by his Godmother Winnifred David McComber.

Cory attended schools in Cornwall after St. Lawrence High School. He obtained his license as a transport trailer driver.

Cory loved fishing and hunting been known to take down a buck using a bow and arrow and worked on cars.

Cory is survived by his nieces and nephews and many aunts, uncles and cousins. Cory had a special bond with his cousin Debbi Chadwick-Small and her husband David and his best friend Kim and Henry Richie. Cory will be remembered in our hearts forever. Cory will be cremated, and the burial will take place on Kawehnoke at a later date. This will be a private burial.