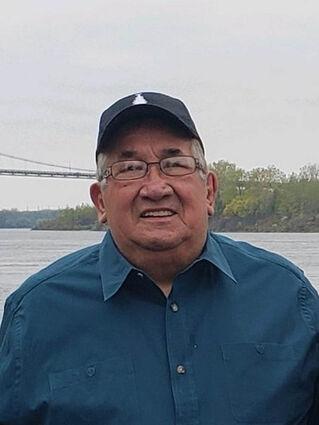 Gordon was born on March 11, 1940 at home in Akwesasne, the son of the late Noah M. and Sarah (Jackson) Ransom. He attended Mohawk Schools and Bombay High School. In 1960, he entered the US Army, proudly serving his country until his honorable discharge in 1964. While stationed in Alaska, he was proudly awarded for his completion of the 100 Mile Cross-Country Ski Competition. He also participated in the protection of our country in the Bay of Pigs. He later achieved his GED with Operation Education through Salmon River Central School. Gordon was previously married to Audrey Ransom , Patricia Oakes, and Donna Fay Valentie all ended in divorce.

Gordon was an ironworker for 65 years, first working with Local #440 and later with Local #721 in Toronto. He also worked as a Tribal Police Officer in the early 70's. He was a member of the Knights of Columbus, Andrew W. Cook American Legion Post #1479 where he served as Sergeant of Arms for many years, and was a member of the Disabled American Veterans, St. Regis Mohawk Senior Citizens and the Akwesasne Death Benefits Group. Gordon also proudly participated in the annual Veterans Day ceremonies at the schools for many years. He had a great love for history and playing Trivia Pursuit. Gordon was very quick-witted, always had a good joke to tell, enjoyed planting trees, tinkering around the house, driving his tractor, and being on the river with his pontoon boat,and loved spending time with his grandchildren.

In addition to his parents, he was predeceased by siblings, Nelson and Noreen in infancy; and brothers, Manfred Ransom on June 14, 2017 and Orlo Ransom on December 8, 2017; and a brother-in-law, Robert "Bobby" Sunday on October 14, 2006.

Friends may call on Tuesday 2-7:00 PM at the Donaldson Funeral Home, Massena. Due to occupancy restrictions, funeral services will be held privately.

Please note that visitation will be occupancy controlled with those attending required to observe social distancing and wear face coverings. If occupancy limitations are reached, those attending may have to wait outside until occupancy has been reduced.

Memorial contributions may be made in his memory to Hospice of the North Country or St. Regis Catholic Church.

Friends are encouraged to share memories and offer condolences to his family online at http://www.donaldsonfh.com.