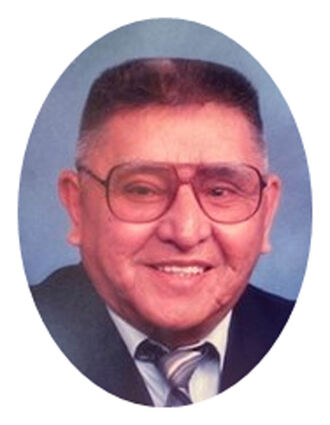 Abraham was born on September 11, 1923 on Kawehnoke, the son of the late Paul and Katie (Seymour) Caldwell. He attended school at Cornwall Island Indian Day School. On July 2, 1949, he married his loving wife of 66 years, Lila Caldwell, (Oakes) at the St. Regis Catholic Church. She predeceased him on March 20, 2015.

Abraham worked on the family farm and the Cornwall International Bridge until his marriage where he began work for a demolition company in Syracuse, NY. Later he worked construction and iron work for Local 440 of Utica, NY. Due to injuries sustained in a construction accident in 1967, Abraham later worked for the Lacrosse Factory and Travelling College on Kawehnoke.

Abraham was a communicant of the St. Regis Catholic Church and always enjoyed his many visits with Father Jerome Pastores and Sister Christine Taylor.

Besides his wife and parents, Abraham was predeceased by one son, Arnold Caldwell on November 2, 1991, and his daughter-in-law, Maxine Caldwell(Cole), his brothers Michael Caldwell and James Caldwell and his sisters, Agnes Caldwell-Boots and Annie Caldwell-McDonald.

Abraham is survived by his children Deborah Caldwell (Vaughn), Harold Caldwell both of Kawehnoke and Norman Caldwell of New Jersey.

Arrangements are under the care and direction of Lahaie & Sullivan Cornwall Funeral Homes, West Branch, (613-932-8482).

Messages of Condolence may be left at http://www.lahaiesullivan.ca

Due to COVID-19 restrictions, there will be no visitation and a private memorial mass will be set at a later date for immediate family only.