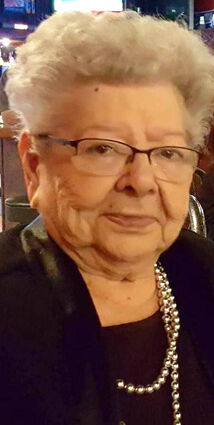 Pauline was born on July 29, 1930 in Akwesasne, the daughter of the late Frank Jacobs and Cecile "Sadie" (Sharrow) Jacobs Jocko. She attended schools in Kanatakon before going to St. Regis Island Indian Day School. On January 18, 1950, she married Vernon Nelson "Tony" Cook in Nedrow, New York. He predeceased her on October 18, 1985.

Pauline worked for a short time at Salina Press in Syracuse before starting with Blue Cross – Blue Shield in Syracuse, where she worked in the mailroom, retiring in 1987. After returning to Akwesasne, she worked for Akwesasne Notes and Indian Time Newspaper. She was a member of Mohawk Nation Longhouse and Akwesasne Death Benefits Group. Pauline enjoyed playing bingo, cards, reading, listening to music, traveling and took great pride in the shawls she made. Of all her enjoyments, her greatest was the time she was with her family, especially when there were children around her.

Friends called at the Donaldson Funeral Home, Massena on Monday 3-7:00 PM. Due to the current health crisis, funeral services will be held privately. Burial will be in Solomon Road Cemetery.

Memorial contributions may be made in her memory to the Tsiionkwanonhso:te Resident Activities Department.