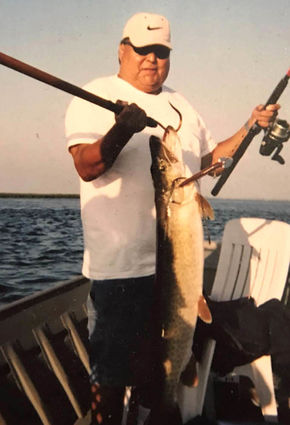 Joseph "Herbie" BUSH-KANERAHTO'HARE peacefully passed at home with his family by his side, Monday June 1, 2020 at the age of 76 years.

Herbie was predeceased by his parents Louise (née Terrance) and Louis Bush of Akwesasne and his sisters Margaret, Evelyn and brother Leo along with a brother and sister in infancy.

Herbie made a career as an Ironworker out of Local 401 Philadelphia and worked all over the Northeastern USA and Canada throughout his working years. He was an avid fisherman and loved spending time on the river sharing his passion with his co-pilot Gracie. He loved spending time with family and friends at "Tota's Island". Herbie played lacrosse and hockey in his younger years and loved (and hated) watching the ups and downs of his Montreal Canadians.

Herbie was a Bear Clan Mohawk and was well known for being a staunch defender of Onkwehonwe Rights. He was at the forefront of resistance always answering the call to support our Native brothers and sisters when needed which was exemplified by him proudly serving as a land defender during the Oka Crisis in 1990.

Herbie will be lovingly remembered and missed by all the people whose paths he crossed. He was known as a "trickster" and had a gift for giving all those he interacted with a catchy nickname. He was a very generous and proud man who never wanted the limelight proving the humility and bravery in his heart was sincere and true.

In Memoriam donations can be made to Mohawk Council of Akwesasne Ambulance Service.

Messages of Condolence may be left at http://www.lahaiesullivan.ca

Services will be held privately with the family at a later date.