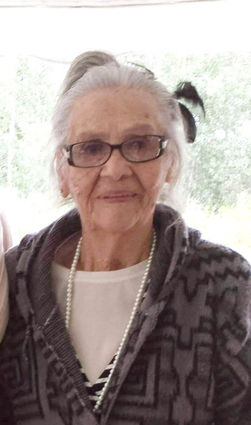 Grace, a member of the Paiute Tribe, was born April 10, 1923 in Bridgeport, California on the Paiute Territory, the daughter of the late James and Cordelia (Tom) Perry. After the unexpected death of her mother, she was raised by her aunt, Molly Perry. She attended Stewart Indian School in Carson City, Nevada.

Grace cleaned homes for Tony Evans and worked for the US Fish and Wildlife Service at their fish hatchery in Pyramid Lake, Nevada. She also was a cook for at time at a Dude Ranch in Sutcliff, Nevada. Grace was a skilled craftswoman, especially with buckskins. She was well-known for her moccasins and gloves made of buckskin and took exceptional pride in her beadwork on the moccasins and gloves along with the jewelry she made. She also was very skilled in making Paiute styled cradleboards. She proudly sold her goods throughout her territory. Grace moved to Akwesasne in 2014 to be with her daughter and son-in-law. She was a member of the St. Regis Mohawk Senior Citizens and the Akwesasne Death Benefits Group.

She was predeceased by her husband, Levi Frazier in August 1973; two sons, John Leroy Frazier and Douglas Eugene Frazier in infancy; a grandson, Adam Lazore in 1994; her sister, Lena Perry Sturgeon; and her brother, James Perry, Jr.

There will be no local calling hours or funeral services. Her cremated remains will be buried in her home territory of Bridgeport, California.