Treasures of Christmas Spreads Some Cheer at the St. Regis Recreation Center 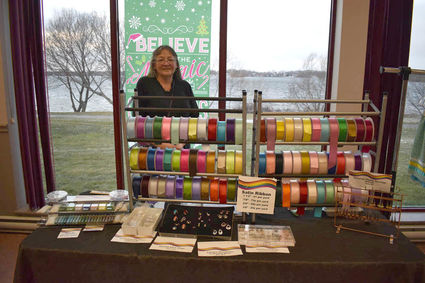 Aimee Benedict enjoyed being a craft vendor at the Annual Treasures of Christmas event.

The St. Regis Recreation Committee held their last major fundraising event of the year, the Annual Treasures of Christmas. The three-day event began on Friday, December 13th. Craft vendors set up shop inside the recreation hall throughout the three days. Taking up most of the hall were all the donated treasures to be raffled off on Sunday evening.

"This year, we've seen more people coming out to support the event," stated Laura Thompson, of the St. Regis Recreation Committee. "We are the last fundraiser before Christmas, so we know shoppers are more likely to purchase from craft vendors that they normally wouldn't buy from. And most of the vendors are not on the Akwesasne Chamber of Commerce."

There were plenty of different and unique items up for sale, made by local artisans and crafters, with many being new to the craft fair business. 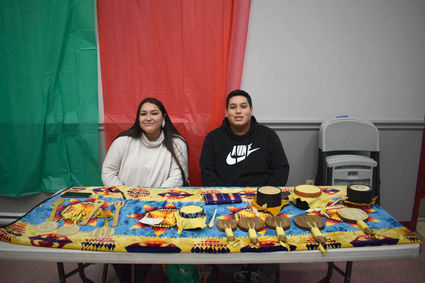 Proudly showcasing some of their recent creations are (L to R) Tekaronhiakwas McDonald and Sequoia Hill.

Aside from all the locally made goodies, there was an array of prizes to be won. All the prizes were donated by local businesses and organizations; such as the Akwesasne Mohawk Police Service, Akwesasne Mohawk Board of Education, St. Regis Recreation Committee, Kawehno:ke Recreation Committee and the Akwesasne Coalition for Community Empowerment. Community members also pitched in during this year's festivities donating generously to the St. Regis Recreations fundraising efforts, whether it be through volunteering their time or donating prizes. "I would like to thank everyone who could help out this year," stated Laura Thompson, "We plan on hosting workshops in the upcoming year with the money we raised during our fundraisers. People have expressed an interest in sewing and beading classes so we will be looking into that."

As soon as the clock struck 4pm Reen Cook, of CKON came in to announce the winners of all prizes. After the winners were picked for the Treasures of Christmas, Reen announced that she would be picking a winner for four full card sets to play CKON Radio Bingo. What a great way to end the holiday event with all sorts of happy community members bringing home some awesome prizes.