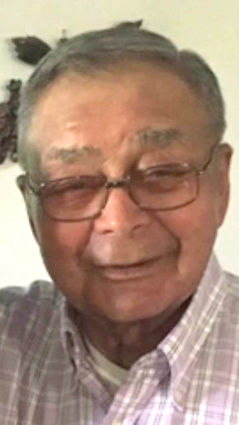 Phil was born August 10, 1933 on St. Regis Island, the son of the late Lawrence and Christie (Jacobs) Francis. He attended schools on St. Regis Island. On April 28, 1956, he married Beatrice McDonald at St. Regis Catholic Church with Rev. Michael Jacobs, SJ, officiating. She predeceased him on February 21, 2004.

In 1952, Phil started his career as an ironworker. He worked for many years with Local #440 until his retirement. He was a devout Catholic and communicant of St. Regis Catholic Church. He was a member of the Kateri Circle and the Rev. Michael Jacobs Council of the Knights of Columbus. Phil was a hard worker throughout his life and enjoyed traveling and watching his granddaughter play lacrosse.

He is survived by his three children, Ray Francis, Deborah Francis and Eric Armstrong, and Josh and Kathleen Francis, all of Akwesasne; 12 grandchildren; 18 great grandchildren; his sisters, Marjorie King and Beatrice A. Lazore, both of Kanatakon; and many nieces, nephews, and cousins.

In addition to his wife and parents, he was predeceased by his brothers, Jacob, Louie, Abraham, Joseph, and Mose Francis; and his sisters, Charlotte Oakes, Louise Gould, and Helen Cole.

Friends called at the Donaldson Funeral Home, Massena on Monday and Tuesday. A Mass of Christian Burial was celebrated Wednesday at St. Regis Catholic Church. Burial will be held privately at the convenience of the family.

Memorial contributions may be made to the Alzheimer's Association or the Tsiionkwanonhso:te Resident Activities Fund.