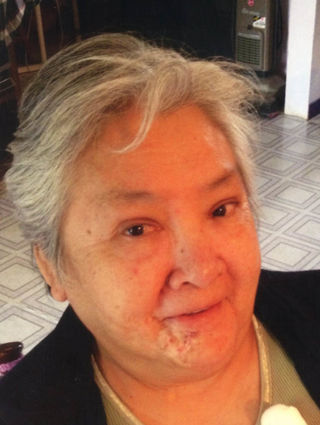 Elizabeth was born September 14, 1939 at the family home in Tsi Snaihne, the daughter of the late Paul and Theresa (Curry) King. She attended schools in Tsi Snaihne and Kanatakon. She later went back to St. Lawrence College where she earned her GED and took courses in finance and accounting.

She first worked for a time at Bombay Slipper Factory before starting in the Finance Department as a payroll clerk with the Mohawk Council of Akwesasne, retiring after over 30 years of service. She was a communicant of St. Regis Catholic Church and enjoyed visits to the casino and playing bingo. She cherished the time she was able to spend with her great grandchildren who affectionately called her "Tota Ma."

In addition to her parents, she was predeceased by her husband, Thomas Oakes in 2004; a granddaughter, Alicia in 1981; and her siblings, Mose, Louise, Sarah, Joseph, Edward, and James in infancy.

Friends called at the Akwesasne Homemakers starting Tuesday until 1:00 PM Thursday. A Mass of Christian Burial will be celebrated Thursday 2:30 PM at St. Regis Catholic Church with Rev. Andrew Amyot celebrating. Burial will be held privately.

Memorial contributions may be made in her memory to the Akwesasne Cancer Support Group.