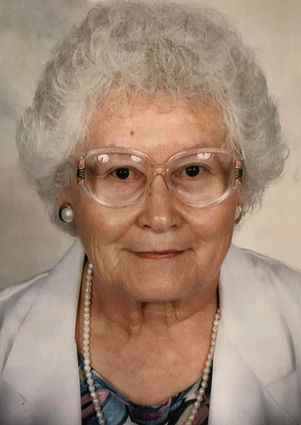 AKWESASNE – Mrs. Christie Grace (Herne) Thompson, 93, a longtime resident of St. Regis Road, peacefully passed away Sunday morning, October 28, 2018 at Tsiionkwanonhso:te – Cornwall Island Long Term Care Facility, where she had been a resident since May 2008.

Christie was born July 25, 1925 at the family home in Akwesasne, the daughter of the late William and Charlotte (White) Herne. She attended Mohawk schools and graduated from Bombay High School. Following her graduation, she continued her education at Champlain Valley Hospital School of Nursing, where she earned her nursing degree. While in college, she trained with the Cadet Nurses Corps in preparation of overseas training for the war. On September 4, 1948, she married the love of her life, Stewart P. Thompson at St. Regis Catholic Church with Rev. Michael Jacobs, SJ, officiating. He predeceased her on August 20, 1997.

Christie first started her nursing career working with Dr. Rutkowski in Akwesasne before moving to the New York City and New Jersey area, where she was also a registered nurse. She returned back to Akwesasne, where she started work in the maternity ward at Massena Memorial Hospital. She continued there for 34 years, retiring in 1981. After her retirement she continued to service the nursing needs in her community as a substitute nurse at the St. Regis Mohawk Health Clinic, the St. Regis Mohawk Schools, and the many community members that called on her privately. Christie was a communicant of St. Regis Catholic Church and the Akwesasne Death Benefits Group. Christie enjoyed flower gardening, crocheting, and cherished the time she was able to spend with her family. She also enjoyed doing beadwork, a skill that allowed her to bead at the local slipper factories to pay her way through nursing school.

Christie is survived by her children and their spouses, Linda Howe and Craig Bader of Sterling, New York; Leslie and Elaine Thompson and Jerry and Connie Thompson, all of Akwesasne; and Jean and Marty Altman of Bowling Green, Florida; her grandchildren and their spouses, Ian and Cindy Howe, Mike and Danielle Thompson, Nolan and Cheyenne Thompson, Kyle Thompson and Phil White-Cree, Jordan and Diana Thompson, Kelly and Tyson Back, Lesley Lang, and Justin and Jacob Altman; and her great grandchildren, Connor, and Etta Howe, Saka, Taka, Stella, Rory, Nolie Ann, Brantley, Clayton, Joey, Adrian, Liam, and Angus Thompson, and Kenna and Nola Back.

She is also survived by her sisters, Caroline and Phillip Mangone of Clifton, New Jersey; Phoebe Curran of Massena; and Hilda Herne of Akwesasne; her brothers-in-law, Walter Morris of Bronx and Mike Rock of Long Island; her husband's siblings, Katherine Thompson, Grace Roundpoint, and Joseph and Carol Ann Thompson; her godchildren, Wayne Mitchell, Wanda Patterson, Randy Hart, William Morris, and Nicole Deshaies; and many nieces, nephews, and cousins.

In addition to her loving husband and her parents, Christie was predeceased by her grandson, Christopher Thompson on March 11, 2018; her sisters, Mary Elizabeth "Betty" Grant, Anna Mae Laughing, Emily Morris, Loretta Rock, and Holly Herne in infancy; and her brother, Lawrence Herne.

Friends called at the Donaldson Funeral Home, Massena, on Wednesday and may call Thursday 4-8:00 PM. A Mass of Christian Burial will be celebrated on Friday 2:00 PM at St. Regis Catholic Church with Rev. Jerome Pastores celebrating. Burial will follow in Kateri Cemetery.

Memorial contributions may be made in her memory to the Tsiionkwanonhso:te Activities Fund.