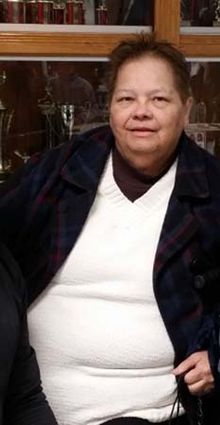 Ann Marie McDonald, 69, of Hogansburg, NY, passed away peacefully early Wednesday morning, with her loving family by her side, at The Alice Center in Malone, NY. She had been a resident there since October 4.

Born in Bombay, NY on February 9, 1948, she was the daughter of the late Alex and Ann Jacobs Mitchell. She graduated from Salmon River Central School. She received her B.A. in Education from Buffalo State and her Masters in Counseling from St. Lawrence University.

On August 23, 1980, she was united in marriage to Andrew McDonald at the Catholic Church in St. Regis, Quebec. He survives.

Ann Marie started her counseling career at Salmon River Elementary School and later moved to the Junior High School. She later served as a counselor at the St. Regis Mohawk School and also the Salmon River Junior High. She retired in 2008.

She enjoyed gardening, fishing and watching her grandchildren dance, play football, hockey, lacrosse and wrestling. She was a member of the Tekakwitha Conference.

Along with her husband, Andrew, she is survived by two daughters and a son-in-law, Alexandra and Jason David of Snye, Quebec, and Charlotte McDonald of Hogansburg, NY; one sister, Sister Kateri (Delia) Mitchell of Alexandria, LA; three grandchildren, Nolan and Mitchell Terrance and Hadley David; and many nieces, nephews and cousins.

Besides her parents, she was predeceased by one daughter, Colleen McDonald in 1982, three brothers, William "Buster" Mitchell on July 24, 2003 and Larry and Paul Mitchell in infancy.

Calling hours will be Tuesday, Oct. 24 from 2-4 and 7-9 p.m. at the Cappiello-McKenzie and Cosgrove Funeral Home in Fort Covington, NY. A Funeral Service will be held Wednesday, Oct. 25 at 11 a.m. in the funeral home chapel, with the Rev. Jerome Pastores officiating.

Donations may be made in her memory to the St. Regis M.C.A. Ambulance Service.

Arrangements are through the Cappiello-McKenzie and Cosgrove Funeral Home in Fort Covington, NY.

Online condolences may be made to the family at http://www.brusofuneralservice.com.