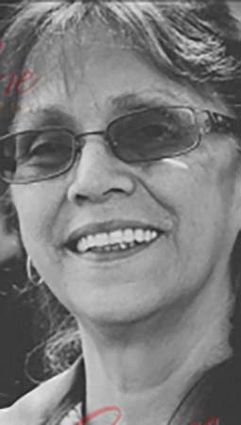 Pat was born August 9, 1953 in Syracuse, the daughter of the late Alexander and Harriet Thompson Jacobs and attended schools in Syracuse. On November 11, 1972, she married Warren E. Jock at the St. Regis Rectory.

Pat was a waitress at various restaurants in Akwesasne. She also operated her own business, Made Clean, for many years. In recent years, she was the manager of the Ganienkeh Snack Shop. A Wolf Clan member, she participated in the activities of the Ganienkeh and the Kanienerekowa Kanonsesne Longhouses. She enjoyed crafting, beadwork, reading, and crossword puzzles. She mostly enjoyed the special memories and times she was a Tota to her own and to others.

Pat is survived by her husband, Warren; her children, Heather and Patrick David and Ron Jock and his companion, Tosha Pyke, all of Akwesasne; her beloved grandchildren, Dustin, Miranda, Frank, Bo Emree, Alivia, Hardie, Ray Vaughn, and Angel; and her great grandson, Creed.

Pat is also survived by her sisters, Sandy Hodges of Kirkville, Shirley Janack of East Syracuse, and Gloria Jacobs of Millen, GA; her brothers, Phil and Mary Ann Jacobs of Florida, and Mike Jacobs of Perkins, GA; and many nieces and nephews.

In addition to her parents she was predeceased by two brothers, Louie and William Jacobs.

Friends called at her home on Monday and Tuesday. Pat was then moved to the Ganienkeh Longhouse where she rested until her funeral ceremony on Wednesday. Burial will follow in Ganienkeh.

Memorial contributions in her memory may be made to the Hogansburg Akwesasne Volunteer Fire Department.